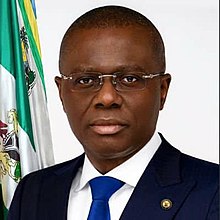 Lagos State Government has debunked allegations making the rounds on Social Media, of condoning Physical Planning laws violation by some developers in both the Osborne Foreshore Phase II and Peace Valley Estate, Magodo.

This is contained in a statement by the Commissioner for Physical Planning and Urban Development, Dr Idris Salako, in Alausa on Monday.

The statement was made available to journalists by Mr Mukaila Sanusi, Assistant Director Public Affairs in the Ministry of Physical Planning and Urban Development.

Salako said a social media user who claimed to be an Urban Planner/ Planning Advocate, made wrong assumptions and insinuations about residents of Osborne Foreshore Phase II and Peace Valley Zone, Magodo.

He said the accuser alleged that the residents were lamenting activities of some developers “whose development on the two estates violate the extant Operative Development Plans and the Approval Order for the localities”.

The commissioner said the publication also alleged the introduction of new Building Approval Order 2013-2033, sequel to the change of estate’s Master Plan, and wrongful classification and change of the Osborne Foreshore Phase II Approval Order without consulting residents.

He disagreed with the position of the writer and said that “it was important to correct the misinformation being peddled in the social media report and to disabuse the minds of Lagosians by setting the records straight”.

Salako said contrary to the insinuations, the residents of Osborne Foreshore Phase II  “influenced the increase in height of the area from the original 4/5 to 10  floors, while Phase I still remained 4/5 floors”.

He said agitations by the residents as original allottees resulted in the review of the Approval Order for Osborne Foreshore which brought about increase in height and density of the estate.

He added that government’s intervention was to ensure proper review for the benefit of all concerned.

He debunked allegations of non-involvement in the review saying that ongoing review process was borne out of several consultations and engagements with the resident associations, in line with regulations guiding development planning in the state.

The commissioner said that review was inclusive and was done along with residents of the estate after meeting with them for more than ten times.

“The outcome of which was the Ministry’s encouragement of the residents association to engage a consultant, thereby leading to the engagement of Messrs. MOA Planners  to prepare a revised Plan along with the review sent by the Federal Ministry of Works and Housing.

“The Revised Plan will still be subjected to stakeholders engagement before final Approval.

” It is therefore disheartening that in spite of repeated dialogue, the latest of which was held with the Governor of Lagos State, Mr Babajide Olusola Sanwo-Olu three weeks ago, the best that the Osborne- Foreshore Residents Association Phase II (OSFRA) could do was to resort to the social media to ‘intimidate and embarrass’ the Lagos State Government”, he said.

The Commissioner insisted the Police were professional when it tried to restore order and condemned the erroneous publication which exagerated the incident and made false claims.

Salako condemned the social media misinformation saying “no amount of pressure would compel the government to outsource its responsibility for Physical Planning to groups or individuals”.

He said government would continue to protect the built environment and relate to everyone equally, irrespective of status or creed. (NAN)