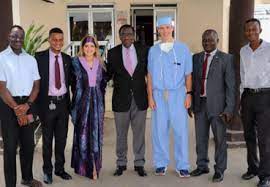 The Cardiology Unit in the Department of Medicine at the Lagos State University Teaching Hospital (LASUTH) in collaboration with Cardiostart International recently carried out a two-tier cardiovascular mission for less privileged patients with heart diseases. The mission which involved open heart surgeries and cardiac interventional surgeries, kicked off on Friday, 14th of October, 2022.

The Chief Medical Director of the Lagos State University Teaching Hospital (LASUTH), Prof. Adetokunbo O. Fabamwo thanked the Cardiostat team for its keen and passionate interest in the last spanned 8 years in the healthcare system in Lagos and LASUTH in particular. He noted that the effort of the team has helped to improve standards in the provision of healthcare solutions in LASUTH and has so far given unquantifiable hope to many families who had otherwise thought that their loved ones may never access the required intervention. He acknowledged that the partnership is no doubt a beneficial one, and the management of the hospital is not taking the effort for granted.

Dr. Emily Farkas, a US based Cardiothoracic Surgeon, who is also the incoming President of Cardiostat International commended the effort of the cardiac team at LASUTH. While making comparisons with when Cardiostat first became involved with the hospital, Dr. Farkas described the progress as phenomenal. She said her team is currently performing just a supportive role to the in-house cardiac surgeons in LASUTH as they have become the almost perfect at what they do. She opined that the quantum leap by the hospital to provide a Cardiac Catheterization lab is highly commendable as more surgeries can be done and invariably more lives can be saved. She therefore, promised the continuous support of Cardiostat to continually provide equipment, consumables and the much-needed support to the hospital on all fronts.

The Head of LASUTH Cardiac Team and Consultant Cardiothoracic Surgeon, Dr. Bode Falase said the Unit is resolved to providing high level of cardiovascular care to the need patients in Lagos State and Cardiostat has helped the hospital to achieve this dream to a large extent. He said in the over 18 years of cardiac care in LASUTH, several giant strides have been taken and all hands are on deck not to lose momentum, but to increase the number of lives saved on a daily basis, which is the ultimate goal. Dr. Falase noted that the aspiration to become the best cardiac center can only be achieved by increasing the capacity to test and consult with more patients, that way, cases can be diagnosed in the earlier stages and patients may have more chances of full and quick recovery unlike when cases have deteriorated and have become high risk.

The Head of Interventional Cardiology in LASUTH, Dr. Seye Oladimeji who gave the overview of the mission said the main aim of the two-tier mission is to further set a pace for interventional cardiology practice in LASUTH and Nigeria as a whole. He emphasized that the hospital had started interventional cardiac procedures before now but the presence of the more experienced Cardiostart team will ensure quicker advanced skill transfer.

Dr. Oladimeji expatiated on the cost relief the mission had on the patients. He said, the battery of the CRTD (Cardiac Resynchronization Therapy Device) alone cost three and half million naira and this is exclusive of hospital admissions fees, procedures and so on. He noted that the financial burden would have discouraged a lot of patients but now, they are paying next to nothing for their treatment.