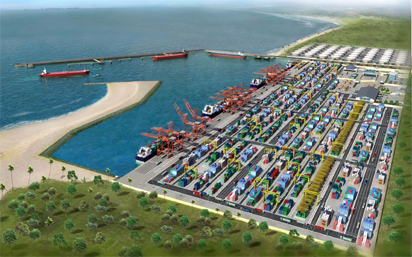 The management of Lekki Deep Seaport and the Federal Government are closely collaborating to ensure early realisation of the project which is scheduled to come on stream by the last quarter of the year.

The Federal Government has expressed the hope that when operational the port will help Nigeria’s quest to boost its economy through the window of African Continental Free Trade Agreement (AfCFTA).

Information and Culture Minister, Lai Mohammed, who inspected the facility in Lagos, said the Federal and Lagos State government would generate $ 201 billion through taxes, royalties and duties from the seaport.

The Managing Director of Lekki Deep Seaport, Du Ruogang, said the port would eventually change the economic landscape of Nigeria and the country would become a hub in the West and Central African region.

Ruogang, urged government for support in the transshipment policy, an important target for the port.

He also called for government’s support in the cargo evacuation system, noting that the roads connecting to the port are not satisfactory to the demands of the evacuation requirements of the port.

On his part, the Minister, said the port would impact positively on the economy with initial target to generate 169,972 jobs and enable Nigeria to regain the maritime businesses it lost to ports in Togo, Cote d’Ivoire and Ghana.

Mohammed, said with the port, Nigeria will become a transshipment hub and that the revenue the country is currently losing to neighbouring countries would be regained.

“The investment is huge, $1.53 billion on fixed assets and $800 million on construction. But the aggregate impact has been put at $361 billion in 45 years, which will be over 200 times the cost of building it. The direct and induced business revenue impact is estimated at $158 billion, in addition to a qualitative impact on manufacturing, trade and commercial services,” he said.

The General Manager/Head of Government Relations and Security, Lekki Freeport Terminal, Fubara Awanta, said with the draft of the port, which is the deepest in West Africa, Nigeria should not lose the huge revenue that it would make from the port due to several bottlenecks.

He appealed to the government to ensure the key roads connecting the port should be completed to boost cargo evacuation as the short-term support, while for the medium term the government should assist in ensuring the movement of consignment through barging.

“In the course of doing barging there are so many additional fees that will be paid like Cabotage, if all these additional costs are not well managed, most persons will not want to evacuate their cargoes that is why you see from the point of calculating our return on investment, our pricing must be highly competitive,” he noted.

The Executive Secretary, Nigerian Shippers Council (NSC), Emmanuel Jime, noted that badge creation modalities out of the port is a critical component and if not carefully considered the port will become like Apapa and Tin Can in terms of cargo evacuation.

The Minister assured them that the government was passionate about developing the business environment, noting that the idea of Presidential Council on Enabling Business Environment was to ensure the country is competitive.

On the issue of roads, the Minister said the Lagos State government, Federal Government and Dangote Group are in a private partnership to improve and widen the road to ensure efficient cargo evacuation.

“We are concerned about the efficient evacuation of goods and services at the port. The ultimate goal is to connect this port with the rail link for optimal use.

“A project that when completed will give us the best seaport in West Africa. We are not unaware that we need to do a lot to ensure that the port becomes efficient, but we are on the right track,” he said.