Lionel Messi breaks down in tears at Barcelona press conference 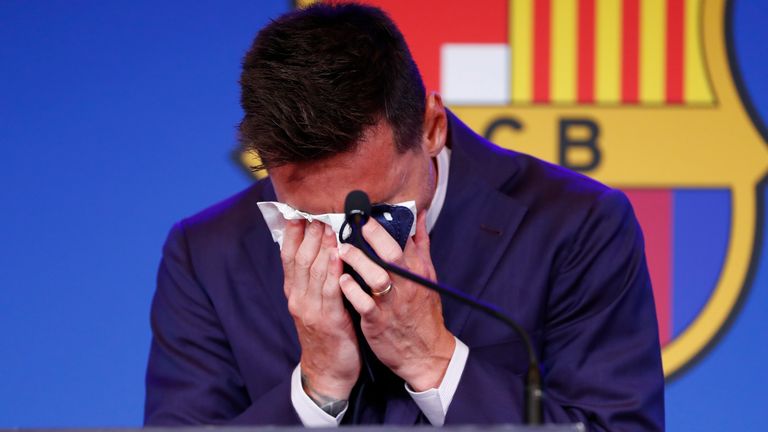 Lionel Messi was in tears at the start of the Barcelona press conference over his future on Sunday, three days after financially-strapped Barcelona announced they were unable to keep the superstar who is reportedly close to a move to Paris Saint-Germain.

During the press conference monitored by The PUNCH, Messi clarified that he had agreed to take a 50 per cent wage cut during negotiations before the new deal collapsed.

“I offered to reduce my salary by 50 per cent and they didn’t ask me for anything else.

“The news that I’d asked for 30 per cent more is a lie. We did everything we could and it wasn’t possible.

“A lot of things people are saying aren’t true and like I said, I did everything [I could].

“I did everything possible and the club, Laporta, they couldn’t do it because of La Liga.

“I’ve heard things said about me, that I didn’t want to continue, but on my life, we did everything we could because I wanted to stay.

“Last year, I didn’t want to stay and I said it; this year, I wanted to stay and we couldn’t.”

It will be his first public comments since Barcelona announced Thursday that Messi, the club’s all-time top scorer and appearance maker, would be leaving after 21 years.

Barcelona president Joan Laporta said on Friday he was not prepared “to put the club at risk” by renewing Messi’s contract, as the club face up to huge financial problems ahead of the start of La Liga on August 15.

Laporta said Barcelona were no longer negotiating with Messi and the Argentine forward was considering other offers. Punch