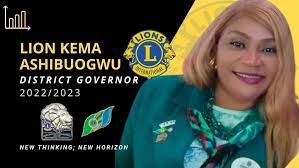 Mrs. Kema Ashibuogwu, the new district governor, DG, of the International Association of Lions Clubs District 4048B1 Nigeria, has restated commitment of the Club to support reinforcement of the country’s healthcare system.

She said though the Club is committed to make certain sacrifices Government on its part should initiate fiscal policies that will accelerate Nigeria’s economic transformation.

Ashibuogwu, made the call in Lagos recently when she was introduced as the new district governor.

She said the time has come for government to proactively develop measures to lessen impact of current economic hardship on the populace.

In particular, Ashibuogwu, emphasized the need for government to pay attention to the hunger and health issues that Nigerians face.

She claims that because of how awful the economy is, most individuals can barely afford to eat or go to the hospital when they are experiencing medical issues.

She continued by saying that among other things, raising awareness for programs aimed at empowering young people, feeding the hungry, and fighting childhood cancer are among the Lion’s Club’s annual programs.

“I want the government to prioritize hunger and health, she declared, adding, People are starving, conditions are deteriorating, they are unable to feed themselves, and when they visit the hospital, few people can be found to care for them. Some of them even lack the funds necessary to purchase medications.

She observed that the system is breaking down and well articulated economic policies that concentrate on these two areas can enable citizens live healthy lives.

“As citizens, we also have a responsibility. The Lion Club will also pay particular attention to maintaining a safe atmosphere. In Africa, for instance, we don’t pay as much attention to the environment. The amount of greenhouse gases that are released into the atmosphere as a result of carbon monoxide emissions has an impact on climate change and global warming.

“In the Western world, trees are planted to absorb the majority of these gases, which do not directly affect people. Therefore, one of the most important things that genuinely helps in that area is the planting of trees. In order to encourage as many individuals as possible to accomplish that

In addition, Lion Sodeinde Oladele Sunday, the immediate past president of the Agege Diamond Lions Club, said that Mrs. Kema Ashibuogwu has a reputation for capacity building, welfare, and proper reiteration of lives. He added that we do not expect anything less than expanding the horizons of the Lions Club, particularly in areas of advocacy.

“In addition to government initiatives, Nigeria faces a variety of issues in terms of humanitarian gaps, which Lions Club has always worked to close. Therefore, all Lions Club members anticipate that Lions Club will move at a faster speed than in the past in this area.

“The Lions Club is a humanitarian organization that deals with caring for the destitute and the downtrodden in society,” claims Sodeinde.

“Our goal, which includes battling pediatric cancer, caring for the environment, feeding, empowering kids, and educating those with diabetes, is incompatible with the five tenets of Lions Club Service. These are the cornerstones of Lions Club initiatives that have helped society by bridging gaps and providing aid across the globe