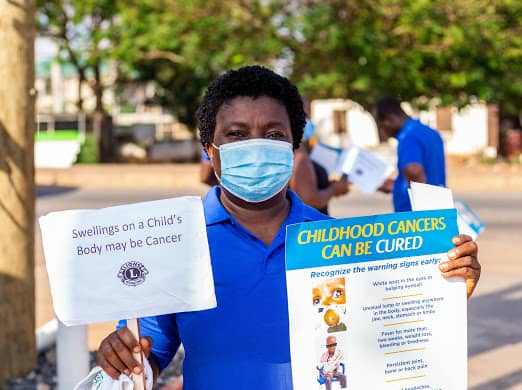 District Governor of the Club Kema Ashibuogwu while outlining her priority projects after her installation, identified childhood cancer as a menace that if not tackled would create a devastating health issue among the growing children population.

Ashibugwu, regretted that despite rising cases of the disease among the children only LUTH has a dedicated ward facility in Nigeria where children with cancer are treated.

She expressed deep worries that despite the threat from spread of cancer among children, little is being done to create the necessary awareness and to develop a policy initiative that will provide support specifically to families that have to contend with the challenges.

According to her, poor parents have to cough out as much as N350,000 to carry out diagnosis in South Africa before returning to start treatment at huge cost at LUTH.

The District Governor, regretted that Nigeria cannot boast of a single Flow Cytometer, (Cancer Detection Machine) that sells for about N64 million or even a Chemotherapy chair of N4 million.

Having identified these challenges and how children die due to absence of treatment facilities, the Club has decided to build a caregiver home at the cost of N100’million at LUTH, Ashibuogwu disclosed at media conference in Lagos on Friday.

In addition, she said, the Club is sourcing for funds to procure a Flow Cytomer and Chemotherapy chair to support cancer treatment in the country.

She called for organisations and philanthropists to support the life saving initiative as she cried out that many children have died of cancer while the society is not fully aware that children suffer cancer at young age.

Nigeria’s Oil Production Output Down By 80,000Bpd In June