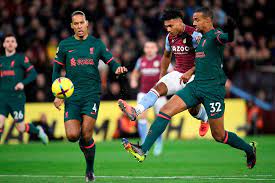 Free-flowing Liverpool beat Aston Villa 3-1 on Monday to go sixth in the Premier League in an entertaining game that featured a first senior goal from Spanish teenager Stefan Bajcetic and a record-making assist by Andy Robertson.

Striker Mohamed Salah tapped in the visitors’ opener in the fifth minute after a sublime passing move from marauding wing-backs Trent Alexander-Arnold and Robertson.

Defender van Dijk bagged Liverpool’s second in the 37th minute with a superb left-footed shot after being set up by Salah, who would have been proud of the finish.

Ollie Watkins put Villa back in the game with a smart 59th minute header across goalkeeper Alisson Becker, before 18-year-old midfielder Bajcetic squeezed in Liverpool’s third to secure the win in the 81st minute.

Bajcetic became the second youngest Spanish scorer in the Premier League after Cesc Fabregas for Arsenal in 2004.

“It was brilliant for him,” Robertson said of his teenage team mate after the match. “He’s really stepped up his game and he was brilliant when he came on.”

The Scottish defender’s pass for Salah’s opener took him past Leighton Baines with the most assists of any defender in Premier League history, 54.

“I’m not into individual things. I’m all for the team. But when you do stuff like that and you’re in the Premier League against some unbelievable defenders, it’s always nice to put yourself at the top,” Robertson said.

Goalscoring opportunities came aplenty for both teams at Villa Park as they peppered each other with balls over the defences who were living dangerously with high lines.

Liverpool’s Darwin Nunez was a nuisance throughout, missing a string of chances including a well-saved volley after he plucked the ball from high over his shoulder.

He won man-of-the match for his tireless running and chances created, including a pullback from the byline for Bajcetic’s goal.

Liverpool are on 25 points, one behind old rivals Manchester United in fifth but a daunting 12 behind Premier League leaders Arsenal, who were playing later on Monday.

After a poor start to the season, Liverpool are finding form and closing down on the top four and a hoped-for place in next year’s Champions League.

“I think we played exceptionally first half. We were really good,” said Liverpool manager Juergen Klopp.

“Stefan was outstanding when he came on. The genes obviously are there,” he said, referring to Bajcetic’s father who was a Serbian professional player.

Villa were left to rue missed chances, including two scuffed shots from Leon Bailey and a fluffed close-range header from Watkins prior to his goal. – Reuters.