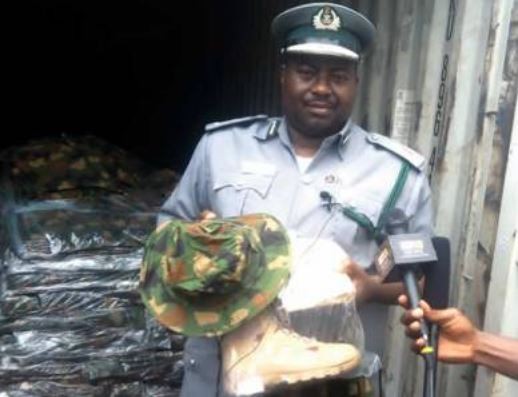 The Onne Port Customs Command of the Nigeria Customs Service (NCS) have seized container loads of machetes and military wares, amongst other banned goods at the Onne Port in Port Harcourt, Rivers State.

In a statement signed over the weekend by the Public Relations Officer of the Command, Ifeoma Onuigbo Ojekwu, the Command also revealed that a total of N115,264,159,921.12 was collected as revenue from January to June 2022.

According to the statement which quoted the Customs Area Controller of the Command, Comptroller Auwal Mohammed, “The 2022 half-year collection shows a remarkable difference from the N78bn collected in the first half of 2021 and N46.6bn collected in the same period of 2020.

“Amongst the seized items were machetes brought into the country without end-user certificate, military wears, vegetable oil, whisky, soap and used clothing.

“The above export figures are over a hundred and fifty (150) per cent increase in value to that of first half 2021.

“The 2022 export statistics show an improvement on the 2021 figures which is a fallout of CAC Auwal Mohammed trade facilitation strategies.

“The CAC also brought to the knowledge of port users that there is a DomesƟc Export Warehouse (DEW) approved by the Federal Government at Onne.

“According to him, the DEW provides further opportunities for exporters to process and package their exports, including packaging while enjoying the seamlessness of export cargo warehouse in Onne directly to vessels.

“He said due diligence by regulatory and government agencies functions, including Customs examination, shall be conducted in the DEW facility.

“Comptroller Mohammed described the DEW facility as a one-stop-shop emplaced by the Federal Government to promote and encourage export trade which the command has aligned with ahead of its full take-off.

“In a short remark at close of work on Friday, July 1, 2022, Comptroller Auwal Mohammed said “This revenue, seizure and export figures coming at the end of the first half of the year attests to a good outcome from our efforts.

“While thanking my officers and men for sticking to the vision of the Comptroller General of Customs, Col. Hameed Ibrahim Ali (Rtd), and implementing the service mandate without compromise, I want to thank our compliant traders.

“As I have always said in our parades with officers and meetings with stakeholders, there are numerous advantages attached to being compliant.

“I want to urge all our officers to brace up for better performance in the second half of this year and together, let’s achieve outstanding results in all our functions.

“My optimism is high because even deployment of scanners to use, will improve on our efficiency,” the CAC concluded.”