Maina To Remain In Detention 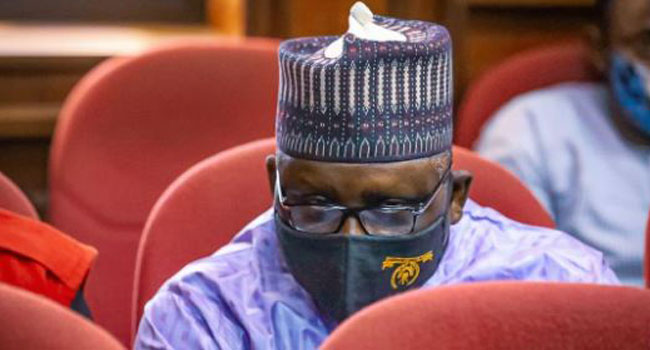 On the strength of this, Maina will remain in prison pending the resumption of the court from vacation.

The vacation Judge, Justice Ahmed Mohammed, refused to hear the bail application which was moved by Maina’s counsel, Mr. David Iorhemba, on the grounds that it was contentious.

Mr. Andrew Ocholi, counsel to the Economic and Financial Crimes Commission, EFCC, had opposed the application, saying he had filed a counter-affidavit and a preliminary objection to show that Maina was no longer entitled to bail.

Justice Mohammed in his ruling held that the application was contentious; noting that, as such, it could not be heard during the court’s vacation.

The judge returned the case to Justice Okon Abang to hear the bail application after the court’s vacation. Abang has been the trial judge in the substantive case.

Maina, is being tried alongside his firm, Common Input Property and Investment Ltd, on a 12-count charge after being accused, among other offences, of laundering over N1billion.

The suspects were first arraigned on October 25, 2019; following which Justice Abang ordered that Maina be remanded in the Correctional Centre at Kuje; pending the hearing of his bail application.

After perfecting his bail conditions, Maina was released from the correctional centre in July but the bail was subsequently revoked on November 18, 2020, after he jumped bail.

Maina was however rearrested and returned to court; with the judge ordering that he be returned to the custody of the correctional centre in Kuje until his trial was concluded.

Following his re-arrest, his lawyer, Mr Francis Oronsaye, withdrew from the case; while his new lawyer, Mr Anayo Adibe, filed another bail application. However, Justice Abang, in a ruling on February 28, refused to grant the application on the grounds that it was without merit and that Maina failed to place sufficient materials before the court to convince it that he deserved another bail.

The judge held that Maina did not deserve to be admitted to bail again; especially after violating the conditions of the bail granted him earlier.

He adjourned the case until October 4 when the court would resume from its vacation.

Afenifere recommends self defence against bandits