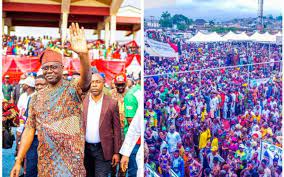 Governor Makinde, while receiving the defectors at theMultipurpose Court of the Lekan Salami Sports Complex, Adamasingba, Ibadan, assured them all of equal rights and privileges in the party.

A statement by the Chief Press Secretary to the governor, Mr. Taiwo Adisa, quoted Makinde as saying that the state will witness what he called Omi Tuntun 2.0 after his re-election in 2023, symbolising accelerated development and greater prosperity for residents of the state.

He said all the defectors would receive equal benefit accruals from the PDP, urging all members of the party to work together to bring about victory for the PDP in all elections in 2023.

In his welcome address, the state chairman of the PDP, Mr.Dayo Ogungbenro, appreciated the defectors for choosing the PDP, stating that the party “believes in equity.”

He also expressed the confidence that the defectors would not be marginalised in the PDP family.

In their various remarks, leaders of the defecting politicians, lauded Governor Makinde for providing good governance for Oyo State even as they pledged allegiance to the PDP.

The leaders included a former Speaker of the Oyo State House of Assembly, who also represented Oyo Central in the Senate, Senator Monsurat Sunmonu, from the ADC, Pastor Akin Alamu who led the AD contingent, a former governorship aspirant on the platform of the APC, Mogaji Joseph Tegbe, former Chairman State Pilgrims Welfare Board (Muslim Wing), under the last administration, Sheik Taofeek Akewugbagold, and the leader of the Liberation Alliance Movement and former Commissioner under the defunct ACN administration, PastorTaiwo Otegbeye.

Otegbeye, in his speech, told the gathering that he was convinced to join the PDP by the good works of Governor Makinde.

He said that he needed no further convincing, having witnessed the tremendous developmental projects undertaken in the nooks and crannies of the state by the Makinde-led administration.

Pastor Alamu, who spoke for the AD, said that his party saw the need to work with Governor Makinde four years ago, adding that leaders of the party including himself, Hon.Babatunde Oduyoye and Mr. Babatunde Tijani among others,had decided to collapse the AD structure into that of the PDP and work for Makinde’s emergence in 2019.

Senator Sunmonu also told the gathering that the ADC benefitted from the alliance it entered into in 2019, adding that members of her team would work for the return of the governor in 2023.

The event attracted the presence of top government officials and PDP chieftains from across the state.