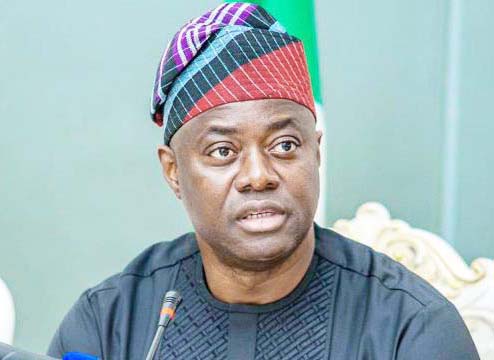 Oyo State Governor, ‘Seyi Makinde, has expressed his administration’s readiness to support the Odu’a Investment Company Limited, a business conglomerate owned by the South-West states, to succeed in its mandate and its plan to expand the business and in effect the economy of the state.

The Governor also declared that until Nigeria is able to diversify its economy by moving away from petroleum to agro-exports and agro-processing, which would enable foreign exchange to come into the system, it would continue to grope in economic hardship.

Makinde stated these late on Thursday, when he received the management team of the company led by its chairman, Otunba Bimbo Ashiru, at the Courtesy room of his office, Secretariat, Agodi, Ibadan.

Makinde, says he sees what the company has been doing as central to his government’s vision to create wealth in the state and move the people from poverty to prosperity, and that he would provide the necessary support to Odu’a.

He equally commended the Odu’a team for what it has done with the landmark heritage of the Yoruba states, even as he charged them to remain focused on the business.

While speaking, the governor stated that though the vision for the company was from the founding fathers of the South-West states, the environment has changed considerably, which has made the governments of Oyo, Ogun, Ondo, Osun, Ekiti and Lagos states to face the core mandate of governance.

He noted, however, that the company has been on the path of growing the business.

He said: “Forget that each of the governors were asked to nominate people to be involved, our expectation is that you will go out there to run the business. That is why I have never called you to say give me a pin or do this favour for me at Odu’a. It is not necessary. You are supposed to run the business and take the decisions.

“I have never called Seni [Adio] to request for any influence at Odu’a because if we truly want you to perform and get the results, we must give you the free hand to take your decisions and move the conglomerate forward. I believe my other colleagues are doing the same thing because that is the right thing to do.

“Also, forget that currently I am the only PDP Governor among them, but we are all aligned to the legacies that we met. How do we proceed with it? So, I will say keep it up and stay really focused and imagine the business as business.

“I am also thrilled at all the good news that you have brought about Premier Hotel. I remember that as a child, Oyo State then hosted a wrestling bout involving one of those famous wrestlers then and then they were lodged at Premier hotel. “I remember going there live to go and see the visitor. But what we are doing in Oyo state is gradually putting in the hard work that is required to bring back that era.”

Governor Makinde, who charged the management of the company to stay focused, said his government would be available to offer every necessary support to them with regards to some of the ventures they are embarking upon, including the Premier Hotel and SWAgCO Limited, an independent subsidiary of Odu’a, with interest in agricultural investment.

“I know you have a very big land between Oyo and Iseyin that can be irrigated through Ikere Gorge Dam. We have spoken about this and that road is being fixed now and we sincerely hope that you will take advantage of that.

“Please, know that we are here to give the necessary support and having a leg within the SAPz is not a big problem at all and also remember that the Dry-port will happen. There is a rail link already. So, that is a major piece of infrastructure. It exists at this moment and the rest of the things we have to do is just a matter of time. They will happen and the SAPz is right next to it.

“The Cocoa money that they used in building Cocoa House did not come from within. They were exporting Cocoa. “So, until we also diversify, move away from Oil to when we can also export agricultural products, processed, the necessary forex will not come in and we will keep groping.

“I see what you are doing as central to creating wealth within the state, and we will provide the necessary support.

“Let me congratulate you once again, and I am with you. We look forward to providing the necessary support to expand your economy, our economy and also take our people from poverty to prosperity. So, we are together in that plan and I will also ask God tonight that He should answer your prayer for Omituntun 2.0 to happen in Oyo state.”

Earlier, the chairman of the OICL, Otunba Ashiru, said the OICL management team has been working hard to bring back the glory of the conglomerate.

He said: “What we are trying to do now is to bring Odu’a to the old glory. I remember when the likes of the late Obafemi Awolowo and others started the Odu’a, they had vision and mission. It was a one-stop shop in Nigeria and they had everything ranging from real estate investment, hospitality and others.

“Today, I am happy to tell Your Excellency that we have started on a good note. You gave us the mandate to make the Odu’a the number one company and economic hub of the South-West and we will achieve that by the grace of God.

“You are my brother and I have come to celebrate with you. I am not campaigning for you. One good turn deserves another and I pray that you will be successful in the next election.”

He also said that the Conglomerate was about expanding Premier Hotel after signing an MOU with an international brand that will manage the hotel.