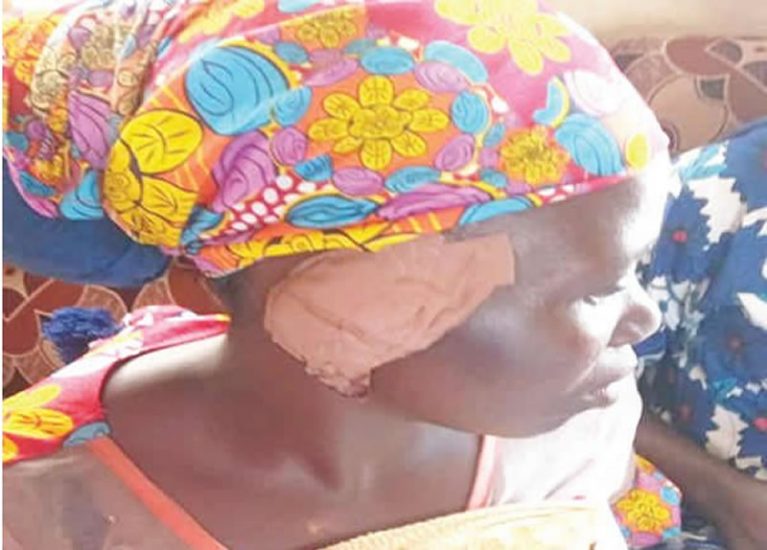 A suspected fraudster, Sikiru Adeniran, has been arrested while allegedly attempting to abduct a baby in Idomu-Owo, Ilese, in the Ijebu North East Local Government Area of Ogun State.

PUNCH Metro gathered that Adeniran chased a young girl, Rodiat Iskilu, to where a woman, Basirat Bakare, was breastfeeding her twin babies.

After realising that Rodiat had escaped, the suspect allegedly descended on Basirat.

While reportedly trying to dispossess her of one of the babies, he allegedly used a sharp object to cut off her right ear.

The attack weakened Basirat, as one of the twins, Kehinde, fell on the ground.

However, in a desperate attempt to prevent the alleged abduction, Basirat raised the alarm, which drew the attention of residents.

She told our correspondent that as neighbours rushed to her rescue, Adeniran ran into a kitchen and locked the door.

Basirat said, “The incident happened last Wednesday. I was with my children outside the house when one of the children in the neighbourhood ran in my direction, shouting for help. She said a man was chasing her.

“I quickly took the girl and my children inside our house. But I was about to close the door when the man forced the door open. He started fighting to dispossess me of one of my twin babies; he used his teeth to bite my hands and neck, just to take my baby away.

“I was still fighting with him when he suddenly brought out a knife and cut my right ear. I was bleeding and shouted for help. It was my cry that prompted neighbours to rush to my rescue. As the man saw people coming, he ran into the kitchen and locked the door.

“He broke the window’s burglary-proof bars and was about to escape through it when neighbours got hold of him. He started pleading and requested an account number to do a transfer of N500,000. He said he was into Yahoo Yahoo (Internet fraud) and wanted to bribe us with the money to cover the case, but we refused.”

An eyewitness, Tola Alawiye, said he called a vigilante, who contacted the Ilese Police Station, from where policemen were detailed to arrest Adeniran.

“When I interrogated the suspect, he offered us a N500,000 bribe, which we declined,” he said.

He said, “When we got to the station, the policemen asked us what we wanted and told us not to write that Adeniran attempted kidnapping my child in the statement. The DPO asked us to write that he was under the influence of hard drugs.

Adeniran even threatened to attack us once he regained his freedom and that he could not spend more than a month in prison. Someone that cut off my wife’s ear and made her slip into a coma?”

The couple’s lawyer, Kayode Oshiyemi, said the suspect’s car was found a few distance away from the community, adding that he wanted justice for the couple.

Oshiyemi said, “Immediately I was informed, I called the IPO to warn him that the matter could not be swept under the carpet. He told me to inform my clients to return to the station to write another statement and also bring eyewitnesses to testify to what happened.

“The family of the suspect has contacted my clients to offer them money after they rejected the N500,000 he offered when he was captured. He parked a Toyota Camry about three streets away from the scene of the incident.

“It was when a landlord complained about the presence of the car at the front of his building that we realised the car was his. He also confessed to owning the car and that he was into Yahoo Yahoo.”

A video clip obtained by our correspondent showed Adeniran’s hands and legs tied after he was nabbed by residents.

He was also stripped half-naked, as his private parts were visible in the clip.

“I am not a thief,” Adeniran said in a frail voice, as residents questioned why he attacked the woman.

The Ogun State Police Public Relations Officer, Abimbola Oyeyemi, confirmed the incident, but denied claims that the police wanted to compromise the case.

He said, “This is somebody accused of attempted kidnap which was foiled and in the process, he injured the victim’s mother. The suspect was brought to the station and was detained.

“The parents of that boy came to the station and said he acted under the influence of hard drugs and that they had been warning him to desist from taking hard substances and that the effect of the drugs caused what happened.

“The parents of the boy also said they visited the affected family to negotiate with them. But that does not concern us; our own is to investigate the case and charge it to court. The suspect is still with us and will be charged to court soon.”- Punch.

No reported case of Cholera outbreak in Anambra – NMA boss

Electricity consumers not required to pay for meters under NMMP -NERC