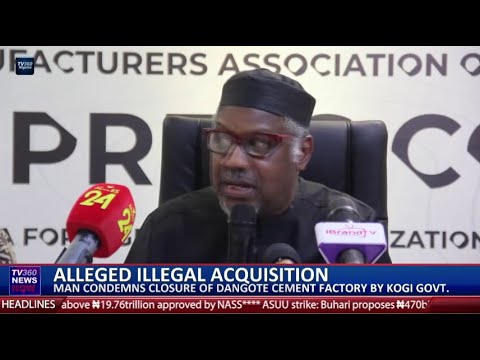 The Manufacturers Association of Nigeria ( MAN) has criticized the Kogi State government for sealing up of the Dangote Cement Factory, Obiajana.

The Association believed that toeing legal path would have settled the case at hand.

The out going President of MAN Engr Mansur Ahmed who stated this in Lagos, the government action is sending negative signals to would be investors in the country.

He said, Kogi State government and it’s operatives should be called to order. It’s action of sealing up Dangote Cement Factory for no justifiable reasons could send wrong signals to would be investors in the country.

” If it has any legitimate grievances the door of the company is open for dialogue.

” If there is any legitimate tax the company has not paid, such issues could be discussed in a friendly and civilised manner rather than taking laws into their hands.

” The court of law is there for the government and the corporate citizens and the people to seek their redress,” he stressed.

He added that the manufacturers in totality in Nigeria condemned the action of the Kogi State government despite all the taxes and providing employment for the teeming youths of the state.