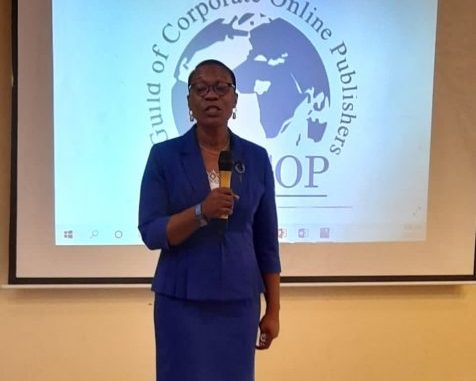 The Publisher of Realnews, Maureen Chigbo, has emerged the new president of the Guild of Corporate Online Publishers, GOCOP for the next two years.

She was elected along other officers at the just concluded Annual General Meeting, AGM, of the Guild.

She took over from the publisher of The Eagle Online Mr. Dotun Oladipo after he served out two terms.

In her acceptance speech on behalf of her new exco team, Maureen Chigbo pledged to do her best in uplifting the ideals of GOCOP and credibility of members with the support and cooperation of the group.

The 2021 GOCOP Election Committee was chaired by Yusuf Ozi-Usman, publisher of Greenberg Reporters while Afolabi Odeyemi was the Secretary. Other members of the committee include Dr. Monday Ashibogwu , Mr. Wole Tokede, and Mr. Kazeem Akintunde.