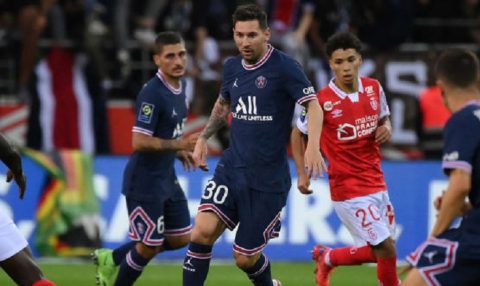 Lionel Messi made his Paris Saint-Germain (PSG) debut as a second-half substitute on Sunday at Reims, but it was Kylian Mbappe who stole the show.

The French forward scored potentially his final goals for the club in a 2-0 victory.

Messi was introduced in the 66th minute at the Stade Auguste Delaune.

This was just after Real Madrid target Mbappe had doubled both his and PSG’s tally in the contest with a first-time finish.

The France striker, who had headed his team in front in the first half, helped PSG make it four straight wins at the start of a Ligue 1 campaign for the sixth time in their history.

They are bidding to regain the title.

Mauricio Pochettino resisted the temptation to select Messi from the outset —- meaning he joined fellow new recruit Gianluigi Donnarumma on the bench.

But the wantaway Mbappe was part of a starting line-up that also included Neymar for the first time this season.

Reims were hospitable hosts for the visiting superstars, hardly surprising considering they had not won at their own ground in the league since January 24.

That was a run of 10 games which set an unwanted club record in the top tier.

The home defence kindly allowed Mbappe plenty of space to nod PSG in front in the 16th minute.

He applied the finishing touch to Angel Di Maria’s cross to get his second headed goal in as many outings.

Reims thought they had an equaliser early in the second half.

This was when Marshall Munetsi prodded in a loose ball after Keylor Navas had kept out a headed effort from El Bilal Toure.

But a lengthy VAR check eventually ruled the goalscorer offside.

At the other end, Mbappe did manage to stay onside to convert Achraf Hakimi’s low delivery in the 63rd minute, quickly followed by Messi’s arrival, on in place of Neymar.

Whether it is Mbappe’s last goal for the club remains unclear, amid strong links with a big-money move to Madrid before the transfer window closes.