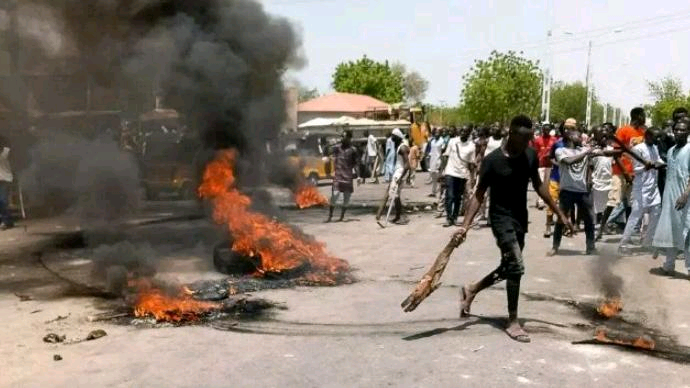 An eyewitness from the community, who pleaded anonymity, told the News Agency of Nigeria (NAN) that the incident had thrown the community into sorrow.
According to the source, the lifeless body of the girl was found in a nearby bush with her breast and vagina removed.
“The natives have been worried that ritualists have entered into the community.
“Only ritualists will rape a girl to death and remove her vital organs for their evil acts.
“That was why when residents heard that the perpetrators of the dastardly act had been arrested by the Neighbourhood Watch, everybody rushed to its office.
“The crowd overpowered the security men and grabbed the two ritualists that killed the girl and set them on fire and watched them burn to death.
“It’s the intention of the security men to take the suspects to the police but they were overpowered by the mob,” the eyewitness said.
When contacted, the President-General and Councillor representing the community, Messrs Val Omeje and Hyginus Ogbu, respectively, confirmed the incident.
They also confirmed that the suspects also hailed from the community.
Attempts made to speak with the Police Public Relation Officer in the state, Mr Daniel Ndukwe, on the incident were unsuccessful.
In a reply to the shot message sent to his cell phone, Ndukwe stated, “l have seen your text message, I will get back to you.”
However, he had yet to get back to the NAN correspondent at the time of filing the report. (NAN)

Scraping, abandoning Ajaokuta steel coy will be a waste — D-G