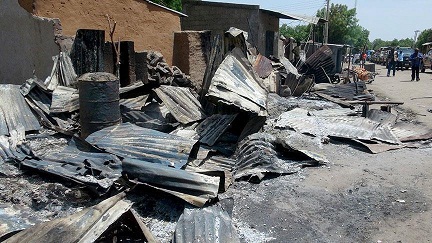 Habib Miller, publicity secretary of the Nigerian Union in South Africa, said Monday nine shops belonging to his countrymen had been looted and burnt.

“Before the violence began, residents held a meeting accusing foreign nationals of selling and hiding drugs in their shops,” said resident Moses Mazibuko, outside a burnt shop.

He said during the meeting residents agreed they should attack Nigerian businesses in the area in a bid to get rid of drugs. “They began the violence on Sunday and continued until Monday,” Mazibuko said.

Police spokesman Capt. Mavela Masondo confirmed that some foreign owned shops had been burnt in the area. “No arrest has been made yet but police investigations continue,” he told Anadolu Agency in a text message.

Videos posted on social media showed buildings on fire with residents watching from a distance.

“It’s wrong to accuse all Nigerians of selling drugs. Some of us are doing legitimate businesses. These attacks are xenophobic,” a Nigerian national who introduced himself as Okocha said.

He said the attacks are similar to anti-immigrant violence that erupted in the country in both 2008 and 2015, displacing hundreds of thousands of foreigners.