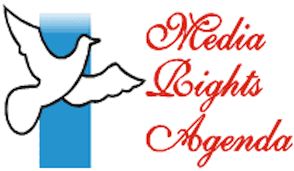 Media Rights Agenda (MRA), has condemned the expulsion of an Arise Television cameraman from a campaign meeting by the All Progressives Congress (APC) presidential candidate, Asiwaju Bola Tinubu, with the business community in Lagos on January 13, 2023, describing the action of the party’s Presidential Campaign Council (APC-PCC) as bizarre, highhanded and a violation of the rights of the media.

In a statement issued in Lagos, MRA’s Programme Director, Mr. Ayode Longe, expressed concern that “the APC-PCC’s blatant disregard for the rights of a journalist performing a constitutionally-protected function even at a time when the party is seeking to persuade Nigerians to vote its candidate into the highest office in the land, portends grave dangers for the media should that candidate prevail in the elections.”

Mr. Bayo Onanuga, the APC-PCC Director of Media and Publicity, had claimed on Twitter that the Arise Television cameraman was caught clandestinely livestreaming Bola Tinubu’s campaign event without authorization and accused him of being “on espionage mission”.

But Mr. Longe expressed outrage at the allegation and the APC-PCC’s justification for its unconstitutional action, describing it as ridiculous and baffling. He said: “What authorization does the journalist require to perform his professional duty of covering a political campaign event? How can a purely journalistic act by a cameraman from a television station filming a public political campaign event and beaming it live to a public audience be characterized as espionage? Should the cameraman have first made a public announcement that he is covering the event so as not to be accused of doing so clandestinely?”

He added: “We find this particularly bewildering because Mr. Onanuga, who issued the justification and made the accusation of espionage, spent a significant portion of his career as a professional journalist engaged in what came to be known as guerrilla journalism, for which he and the two media outlets, TheNews and Tempo magazines, where he served as an editor, were widely applauded, including by people like Asiwaju Bola Tinubu. It is the worst form of irony that he is now attempting to condemn a journalist engaged in his professional pursuit as having committed a capital offence.”

According to Mr. Longe, “If this attitude is indicative of the vision of the party or its presidential candidate on the role of the media in the democratic process, then we shudder to think of what the future holds for journalists and the media community should this attitude and mentality be brought into the highest political office in Nigeria.”

He noted that it is the duty of the media to scrutinize and hold accountable public office holders and institutions as well as public figures, including political parties and candidates seeking public office, and to ensure that members of the public have as much information as possible about them, their programmes and their track records in and out of office, adding that the media cannot properly play their role in the electoral process if they are prevented from having access to public events which form part of the process.

Saying that anyone unwilling to be subjected to scrutiny by the media has no business seeking public office, Mr. Longe stressed that it is contrary to the code of journalism practice in Nigeria and everywhere else in the world that institutions or individuals who are being held accountable should be the ones to determine the media organizations or journalists that are allowed to hold them to account.

He said that journalists are entitled to and should be given the fullest access to all electoral events, and that such access should be non-discriminatory. He therefore urged “the entire media community, regardless of the political sympathies that individual media professionals may have, to rise in unison to condemn the APC-PCC’s undemocratic action.”

Mr. Longe also called on the APC-PCC to publicly apologise to the cameraman and his media organization and make a public commitment not to repeat such action in future.