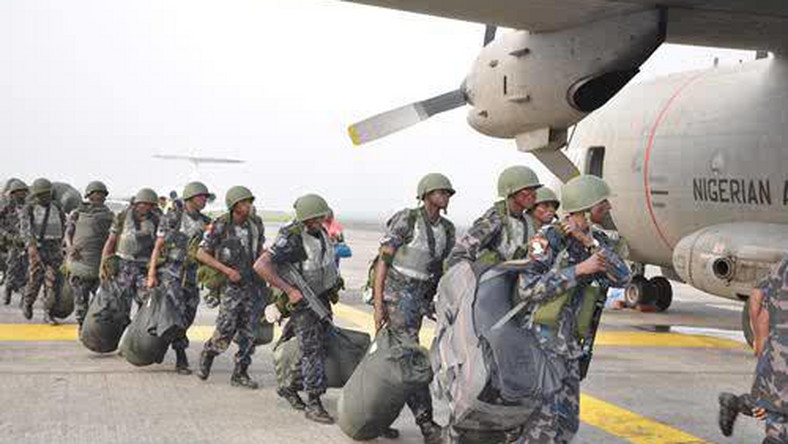 The Nigerian Air Force, NAF, has decorated 13 Air Commodores and 35 Group Captains, who were recently promoted to the next higher ranks of Air Vice Marshal and Air Commodore by the Air Force Council.

According to Air Commodore Ibikunle Daramola, director of Public Relations and Information Nigerian Air Force the decoration ceremony, which took place at the Headquarters NAF Abuja, was witnessed by a large turnout of senior officers, both serving and retired, as well as family members and friends.

While decorating the senior officers, the Chief of the Air Staff (CAS), Air Marshal Sadique Abubakar, charged them to rededicate themselves to the service of Nigeria as they prepare for higher challenges.

According to him, “in the race to add value to the society and secure communities, there should be no finishing line”

“Your promotion will cost tax payers additional resources and this must translate to additional security for Nigeria and Nigerians”, he added.

Air Marshal Abubakar reiterated that the promotion of the senior officers was premised on their past excellent performances and the resolve of the Service to constantly reward excellence.

The CAS noted further that the increasingly complex and challenging security environment requires the Service to put forward its very best at all times.

He therefore, stated that promotion could no longer be business as usual.

According to him, “while time on rank would, understandably, continue to be central, factors such as merit, productivity, establishment vacancy, deployability and, to some extent, geographical spread have combined to raise the bar and make the race even more competitive”, he said.

The CAS explained further that, in the discharge of military responsibilities, the demands on members of the Armed Forces are unique, requiring, in some instances.

Thus, he said it is very important that the Services are led by persons of exceptional leadership qualities so as to eliminate or minimize costly mistakes during operations, which is even higher in the case of the Air Force given the complex nature of air operations.

He went further to specially applaud the spouses and family members of the newly promoted senior officers, while imploring them to sustain the support they have been giving to enable them excel in their new, higher responsibilities.

He tasked the newly promoted officers to brace up for the challenges ahead especially in the collective resolve to regenerate the NAF and ensure a secured Nigeria.

He urged them to continue to apply their skills, experience, commitment and time when and wherever demanded. While highlighting the progress made in repositioning the Service into a highly professional and disciplined force over the last 4 years, Air Marshal Abubakar disclosed that, through the priority attention given to human capacity development, the Service has witnessed unprecedented improvement in aircraft serviceability rate across all NAF platforms.

He said notable achievements had also been made in the area of Research and Development, such as the production of the diaphragm for the Mi-35P helicopter and L39ZA aircraft, amongst many other breakthroughs.

Other areas where significant value had been added, he said, were in the expansion of the NAF Regiment Speciality, with the Force Protection in Complex Air and Ground Environment (FP-CAGE) and Special Forces training to equip the personnel with the skills required to adequately protect NAF bases and other critical national assets.

In terms of flying training, the CAS noted that over 100 pilots had been winged in the last 4 years, with the NAF now boasting of a total of 6 female pilots.

Air Marshal Abubakar observed that all the achievements would not have been possible without the support of the President, Commander-in-Chief of the Armed Forces, President Muhammadu Buhari.

He therefore pledged the commitment of the Service to Mr President’s vision of a secure and prosperous Nation.

Earlier in his welcome remarks, the Chief of Administration (COA), Air Vice Marshal Kingsley Lar, noted that the occasion was another milestone in the career development of the senior officers, who were able to scale through the painstaking screening process as well as the approval by the Air Force Council.

He noted that elevation comes with higher responsibilities and therefore enjoined the newly decorated officers to be more diligent, committed and accountable in the discharge of their duties as well as in their interactions with their professional colleagues and civilians.