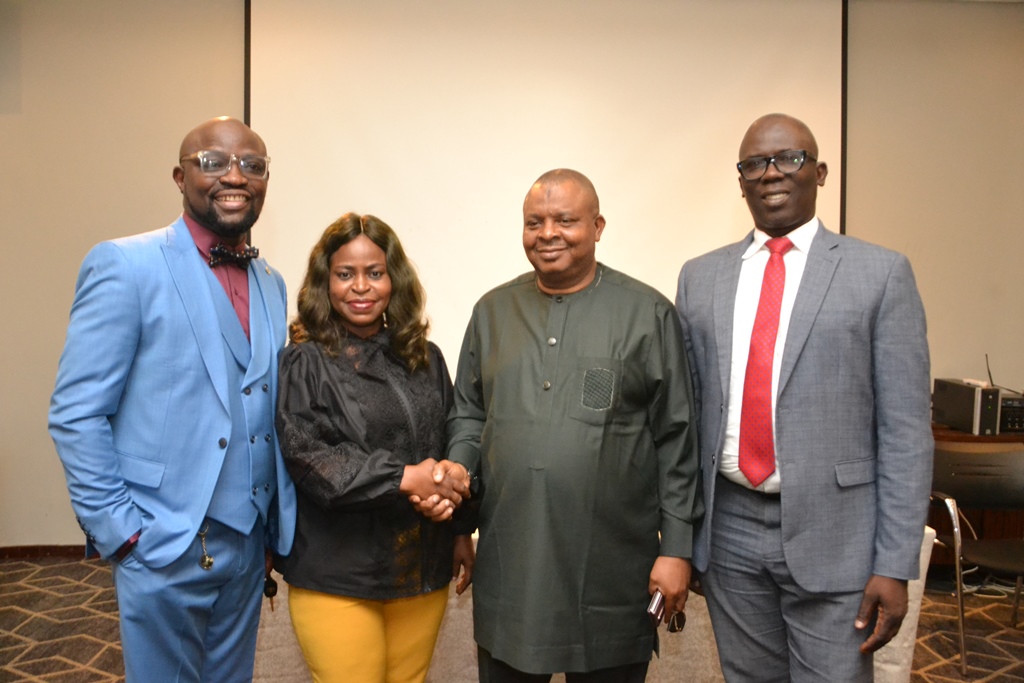 The newly elected executive officers of the National Association of Insurance and Pension Correspondents (NAIPCO) have been inaugurated with a call to them to work hard for the unity of the Association, welfare of members and promote the growth of the insurance and pension industries.

Speaking at the formal inauguration of the executive, which took place at the Radisson Hotel, GRA, Ikeja, Lagos, the Managing Director/Chief Executive Officer of Universal Insurance Plc, the sponsor of the inauguration, Mr. Benedict Ujoatuonu, congratulated the newly elected officers of NAIPCO and commended the Association “for their great job in projecting the insurance and pension industries to the Nigerian Populace.”

The MD/CEO of Universal Insurance, who was ably represented at the occasion by the Company’s Secretary and Head of Corporate Communications Department, Chinedu Onyilimba, pledged the company’s readiness to continually collaborate with NAIPCO “to advance the course of insurance and pension industries in Nigeria.”

The Managing Director/Chief Executive Officer of Sovereign Trust Insurance Plc, one of the sponsors of the event, Mr. Olaotan Soyinka, who was represented at the event by Deputy General Manager, Sales & Corporate Communications, Mr. Segun Bankole, charged the newly elected officers of NAIPCO to work for the common interest of the association and for the overall growth of insurance and Pension industries.

Soyinka stressed that Sovereign Trust will continue to support NAIPCO, adding “You will recall that one of our journalists recently had an accident. Incidentally, he has a third party policy with us, but the person that bashed his car has a third party with another company. We have been trying to see how we can help him get his claims sorted out as fast as possible. Extending that hand of fellowship is so critical to the success of our organisation. We do not in any way underestimate what you represent in the Nigerian society as journalists. So we are solidly behind you and will continue to support you as an association.”

Also speaking, Head, Corporate Communications and Market Development, National Insurance Commission, ‘Rasaaq Salami, who commended NAIPCO for the election of new executives also charged the newly elected officers to work for the interest of the association and that of the industry.

He noted that NAIPCO’s contribution to the growth of the industry or otherwise will also rob off on the Association.

In their words of advice, past president, former officers, and elders of the association, charged the officers to work hard for the unity of members and the progress of the Association.

The officers were also enjoined to demonstrate high level discipline, professionalism, while upholding the ethics of the profession in the discharge of their duties for the good image and integrity of the Association.

Earlier in his speech, the out-going Chairman (now Ex-officio) who is also the Publisher/Editor-in-Chief of Inspen Online, Chuks Udo Okonta, thanked God for the His grace during his tenure, noting that the modest achievement and successes recorded during his administration was made possible by God’s grace just as he implored the incoming administration not to depend in their powers of abilities but to ask God for His grace, wisdom and understanding.

Okonta called on members to support the new executives for the progress of the Association and the growth of the insurance and pension industries.

In her acceptance speech, the Chairperson of NAIPCO who is also the Publisher/Editor-in-Chief of Business Today, Mrs. Nkechi Naechie-Esezobor, promised not to fail the members for the confidence they reposed on her through the election.

While calling for support and cooperation from members as well as stakeholders and players from insurance and pension sectors, she promised to always give a listening ear, ensure consultations especially regarding the issues affecting members and the industry.