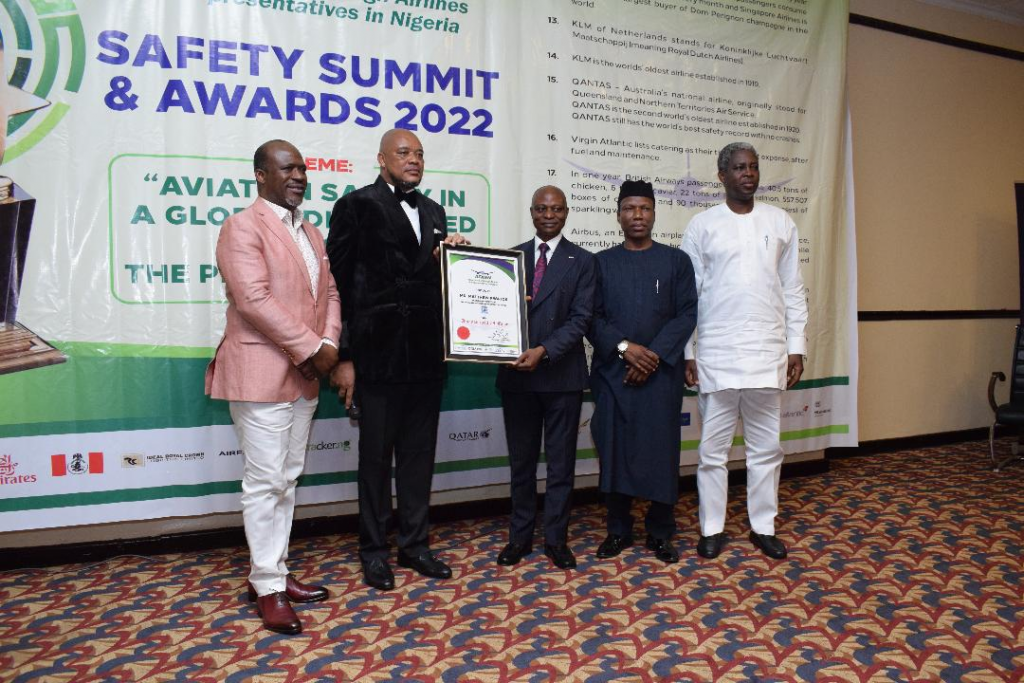 The Acting Managing Director of the Nigerian Airspace Management Agency (NAMA), Mr Matthew Lawrence Pwajok has said the Agency will continue to focus on ensuring safety of the aviation sector through strategic partnership with operators.

He also urged pilots, air traffic controllers, airlines, ground handlers, passengers and other stakeholders in the aviation industry to continue to report aviation incidents to the safety authorities as this would further enhance the relative safety in the industry and also boost confidence in air travel.

Representatives in Nigeria (AFARN) safety summit and awards which held in Lagos at the weekend contended that investing in sensitization of key stakeholders in the area of safety reporting is as important as investing in safety critical equipment and manpower training, stressing that incident reports were a critical and strategic aspect of the aviation safety chain, because “if you don’t report incidents we can’t control them, if we don’t have reports we cannot provide the required risk analysis and mitigations.”

He commended pilots “for being very faithful in incident reporting, even to the detriment of the airlines, as this could sometimes cause slight flight delays while awaiting a review or investigation of the incident by NCAA before releasing the aircraft back for operations.

When these incidents are reported by pilots to ATC, they are immediately relayed to

NCAA for investigation, and when the reported event or defect is mitigated, the aircraft is released back to service.

For instance, we had an occurrence at Escravos yesterday that was reported to the control tower by the pilot, and consequently NAMA informed AIB

and NCAA, and after the required mitigations were effected, the aircraft was released

back to service. It is as prompt as that! These are the kind of 24/7 collaboration,

cooperation, and coordination that have largely enhanced safety in the sector.”

The NAMA boss appreciated stakeholders in the industry for the enhanced safety in the sector which he attributed to the effective synergy amongst stakeholders and strategic efforts by service providers.

The NAMA MD opined that the relative safety enjoyed in the

investments both in infrastructural deployment and human capital development to enhance safety in the Nigerian airspace, thereby ensuring that major air disasters such as those witnessed between 2005 and 2006 were a thing of the past.

According to him, “one of the first things the agency did under the Obasanjo government was the implementation of Safe Tower project and this began with the automation of the control tower at Abuja airport in 2007. In 2008 we completed that of Lagos and Port Harcourt and subsequently Kano. This project provided the main mitigation to what was considered the primary cause of most of these air disasters.

as well as meteorological sensors along the runways and provided ATC

“We went further to deploy the Total Radar Coverage of Nigeria (TRACON) in 2010. We could now track aircraft over the entire airspace of Nigeria and beyond, unlike before when air traffic controllers had to manually depend on pilot reports to control and ensure safety of flights, separation of aircraft from each other, sequencing them for arrival or for take-off. The radar system has the capacity to detect conflicts, aircraft crossing each other, with inbuilt ground safety nets such as short-term conflict alert, medium term conflict detection with respect to aircraft crossing at the same level or in close proximity either vertically or laterally, the radar system will alert ATC.

thus if you are very low to the terrain it will alert us.

from restricted, prohibited or danger areas with known or reported activities hazardous to air safety. These are all ground safety nets, about ten of them that are in-built in the radar system to give the air traffic controller adequate information, and to a large extent, that has enhanced safety in our airspace.”

At the regional level, the ministers responsible for civil aviation in African met in Abuja, Nigeria following the ranking of Africa as the continent with the least volume of flight operations, but with the highest fatal accidents rate in the world. “Thus on 20th July 2012, we had the ministerial declaration in Abuja: what the International Civil Aviation Organization (ICAO) refers to as the Abuja Safety Targets.

Ministers responsible foraviation met in Abuja, reviewed the safety level in Africa and

agreed that over 60% of the fatal accidents were caused by

(iii) runway incursion, excursion and confusion. In addressing these, the Ministerial

Conference and the African Civil Aviation Commission (AFCAC) came up with a 16-point agenda out of that declaration: to reduce loss of controlled flight into terrain by 50%; reduce runway incursion and excursion by 50%; reduce loss of control in flight by 50%, implement state safety programme by CAAs and also ensure effective implementation of oversight, Pwajok said.”

He noted that the above strategies were domesticated at national levels, while strategic and concerted efforts were made towards implementation and enhancement of air safety through investment in safety critical infrastructure, training, establishment of safety management system and quality management system, as well as development of safety plans, safety policies, safety objectives, safety key performance indicators, and acceptable level of safety performance.

He also lauded the Honourable Minister of Aviation, Sen. Hadi Sirika for facilitating

the huge investment in development of air navigation services in line with the aviation roadmap, as well championing recent collaborative efforts by aviation agencies, airlines and other stakeholders in a bid to enhance safety in the nation’s airspace.

This year’s AFARN summit with the theme- Aviation Safety in a Global Distressed Economy: The Place of Nigeria, also had in attendance the Managing Director of the Federal Airports Authority of Nigeria (FAAN),

Olateru, the representative of DG, Nigerian Civil Aviation Authority (NCAA), who were

also inducted into the AFARN Hall of Fame alongside Pwajok.