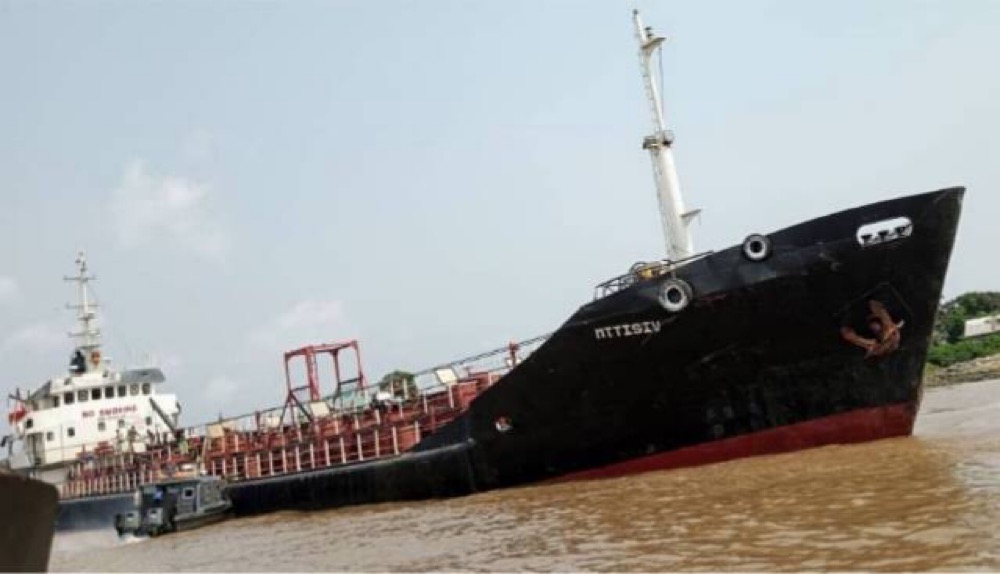 The Nigerian Navy has arrested a vessel, MT QUEEN OF PEACE, laden with an unspecified quantity of crude oil on the Bonny Fair Way Buoy.

According to a statement released on Thursday by Navy spokesman Commodore AO Ayo-Vaughan, the vessel was arrested during its Exercise OBANGAME EXPRESS, a multinational maritime exercise in West Africa, on 11th March, 2022.

He said the Vessel which was under surveillance by the navy had been of interest for over a year after it was last sighted at the Trans Amadi Jetty in Port Harcourt.

The statement added that the vessel switched off her Automatic Identification System (AIS) and proceeded on 3 weeks of dark (unknown) activities but was successfully intercepted South West of Bonny Fair Way Buoy on 15 March 2022.

He said, “The dark activities of the vessel was monitored by the Nigerian Navy Falcon Eye Surveillance System and Nigerian Navy Ship EKULU was detached from the Exercise OBANGAME to intercept and arrest the vessel. Subsequent interrogation revealed that the vessel with 14 crew members onboard was laden with unspecified quantity of crude oil.

“Additionally, the vessel was unable to provide appropriate documentation from the point of loading as well as documents and authority of her intended operations. These therefore led to the arrest of the vessel and she is currently at Nigerian Navy Forward Operating Base BONNY for further investigation and possible hand-over for prosecution.

Ayo-Vaughan noted that the arrest depicts and reinforces Navy’s resolve to consistently sustain its aggressive posture against oil theft and other maritime illegalities.- Whistlers.

NUPENG Warns Of Implications Of Rising Price Of LPG