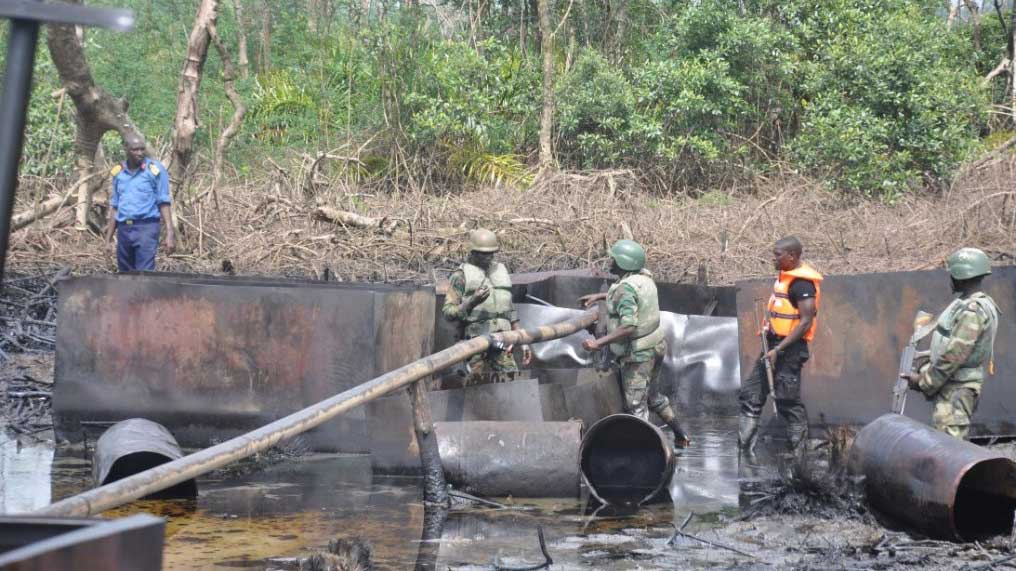 The Nigerian Navy (NN), has destroyed about 637 illegal refineries in the Niger Delta in 2018, through “Operation River Sweep’’.

The Chief of Naval Staff, Vice Admiral Ibok-Ete Ibas, disclosed this in Abuja, while briefing newsmen on the scorecard of the Navy in 2018.

According to him, 104 speed boats and 340 suspects were also arrested in connection with illegal bunkering or snuggling during the period.

The Operation involves air surveillance, insertion of Special Forces by gunboats, pulling down of located illegal refining sites with the use of swamp buggies and arrest/destruction of boats and barges found in such locations.

The CNS said that the quantity of crude oil lost to illegal oil refining activities during the period was about 277, 040 barrels.

He said that records indicated that the navy through its “Operation Tsare Teku” recorded a total of 34 pirates’ attacks during the period.

“A total of 34 pirates’ attacks on ships were reported, with nine successful and 25 unsuccessful.

“Furthermore, a total of 20 sea robbery attacks were reported in 2018, with six successful and 14 unsuccessful.

“Additionally, a total of 46 vessels and barges were arrested for involvement in maritime crimes during the period,” Ibas said.

The navy chief said that in addition to the use of vessels and helicopters, the force had 24 Maritime Domain Awareness (MDA) centres located across the Nigerian coastlines.

“These centres ensure effective surveillance of all vessels in our territorial waters were fitted with Automatic Identification System (AIS) or not,” he said.

He explained that using the MDA facilities and prompt reporting of attacks of vessels at sea led to foiling of several piracy incidents.

Ibas said that with arrest of 46 vessels in 2018 by the navy, “it is envisaged that the MDA facilities will help to present a complete, clear, detailed and updated maritime situation of Nigeria’s maritime domain’’.

He added that “by extension, the Gulf of Guinea will be involved when the whole proposed sites are completed’’.

On enhancement of response capability, Ibas said that the capability of the navy was being enhanced through acquisition of more platforms.

“Notwithstanding these acquisitions, there is need to increase NN’s operational capability by acquiring more vessels in order to enable it respond more effectively to contemporary and future threats.”

He said that the navy remained committed towards improving security around the nation’s maritime area, “with the notable achievements recorded so far’’