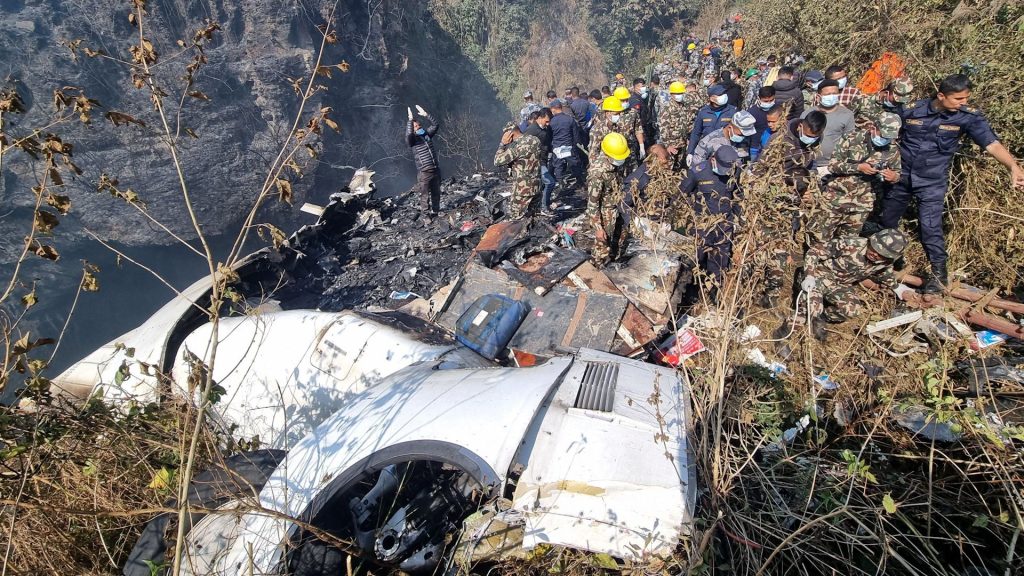 At least 68 people were killed Sunday when an aircraft went down near the city of Pokhara in central Nepal, a government official said, the country’s deadliest plane crash in more than 30 years.

Search efforts were called off after dark, Army spokesman Krishna Prasad Bhandari said, and will resume Monday morning. Hundreds of first responders had been still working to locate the remaining four individuals before then, Bhandari said.

Sunday’s incident was the third-deadliest crash in the Himalayan nation’s history, according to data from the Aviation Safety Network. The only incidents in which more people were killed took place in July and September 1992. Those crashes involved aircraft run by Thai Airways and Pakistan International airlines and left 113 and 167 people dead, respectively.

The civil aviation authority said that 53 of the passengers and all four crew members were Nepali. Fifteen foreign nationals were on the plane as well: five were Indian, four were Russian and two were Korean. The rest were individual citizens of Australia, Argentina, France and Ireland.

The aircraft had been flying from the capital of Kathmandu to Pokhara, the country’s second-most populous city and a gateway to the Himalayas, the country’s state media The Rising Nepal reported. Pokahara is located some 129 kilometers (80 miles) west of Kathmandu.

The plane was last in contact with Pokhara airport at about 10:50 a.m. local time, about 18 minutes after takeoff. It then went down in the nearby Seti River Gorge. First responders from the Nepal Army and various police departments have been deployed to the crash site and are carrying out a rescue operation, the civil aviation authorities said in a statement.

A video clip on social media on Sunday appeared to show the moments before the aircraft crashed. The film, which appears to be taken from rooftop of a house in Pokhara, shows the plane flying low over a populated area and rolling on its side before the aircraft is no longer visible in the clip. A loud explosion can be heard at the end of the video.

CNN cannot independently verify the authenticity of the clip.

A five-member committee has also been formed to investigate the cause of the crash. The quintet must submit a report to the government within 45 days, according to Nepal’s deputy prime minister and government spokesperson Bishnu Paudel.

“I sincerely appeal to the security personnel, all agencies of the Nepal government and the general public to start an effective rescue,” Dahal said on Twitter.

The government declared Monday a public holiday to mourn the victims, a spokesman for the prime minister said.

Indian Prime Minister Narendra Modi and Russian President Vladimir Putin both conveyed their condolences, as did Australia’s ambassador to Nepal.

Nepal’s Yeti Airlines said it was canceling all regular flights on Monday, January 16, in mourning for the victims of the crash.

The Himalayan country of Nepal, home to eight of the world’s 14 highest mountains, including Everest, has a record of air accidents. Its weather can change suddenly and airstrips are typically sited in difficult-to-reach mountainous areas.

Last May, a Tara Air flight carrying 22 people crashed into a Himalayan mountain at an altitude of about 14,500 feet. That was the country’s 19th plane crash in 10 years and its 10th fatal one during the same period, according to the Aviation Safety Network database.

The aircraft involved in Sunday’s crash was an ATR 72-500, a twin-prop turbojet often used in the Asia-Pacific region, especially among low-cost carriers. Planes made by ATR, a joint partnership between European aeronautics companies Airbus and Leonardo, typically have a good reputation.

However, they have been involved in crashes before. Two ATR 72s operated by the now-defunct Taiwanese airline Transasia were involved in deadly crashes in July 2014 and February 2015. The second prompted Taiwanese authorities to temporarily ground all ATR 72’s registered on the island.

In total, the ATR 72’s various models had been involved in 11 fatal incidents before Sunday’s crash in Nepal, according to the Aviation Safety Network.

ATR said in a statement Sunday that it had been informed of the accident.

“Our first thoughts are with all the individuals affected by this,” the statement read. “ATR specialists are fully engaged to support both the investigation and the customer.”