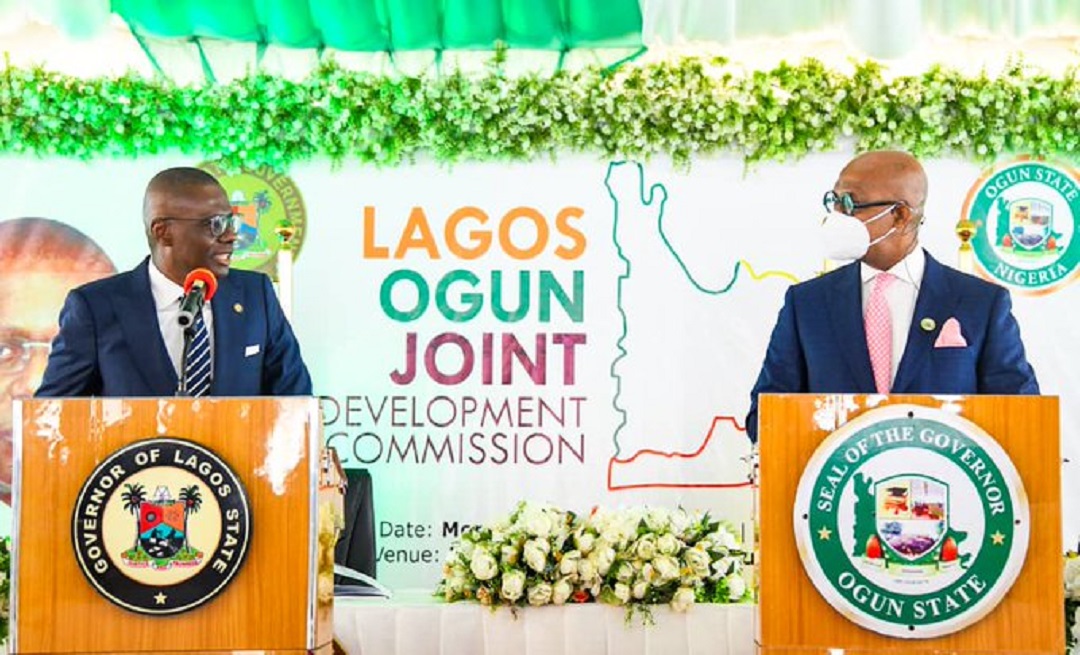 Lagos and Ogun State Governments have forged a new alliance order that will accelerate integration of physical and socio-economic developments of both states.

A deal struck on Monday, led to the signing of Memorandum of Understanding (MoU) for the establishment of Lagos-Ogun Joint Development Commission by Governors Babajide Sanwo-Olu of Lagos and Dapo Abiodun of Ogun State.

The MoU Signing event, held at the Presidential Lodge in Abeokuta, the Ogun State capital, marked a new beginning in bilateral relationship between the neighbouring States, which also share socio-cultural backgrounds. They agreed to work on seven key areas of mutual interests, which are expected to boost security, commerce, urbanisation, infrastructure and also solve boundary disputes.

Members of Executive Councils of both States witnessed the historic event, which was also attended by Federal and State legislators, private sector players, political leaders, youth groups and traditional rulers led by the Alake of Egbaland, Oba Adedotun Gbadebo.

The creation of the joint commission was the culmination of an informal discussion between the two Governors on maximising socio-economic benefits for citizens of their States based on comparative advantages and shared interests.

He said: “The Memorandum of Understanding being signed today is a game changer that will transform the urban agglomeration that exists between Lagos and Ogun States. We are driven by the desire to stimulate socio-economic growth, bridge development gaps and ensure that Lagos’ megacity status is complemented by pervasive infrastructural development even in boundary towns.

“It has become obvious that the best way to accelerate socio-economic development in both States is by embracing a more collaborative approach for growth, development and urban sustainability. Regardless of the challenges, we are determined to build more livable and stable cities. Our goal is to build sustainable urban cities, where the residents of the both States will have a sense of belonging, embrace participatory governance, and recognise their role in achieving solid urban economies.”

The joint commission, Sanwo-Olu pointed out, is a sustainable development agenda under which Lagos and Ogun will combine resources to meet the socio-economic needs of the people and prepare for the future.

After signing the MoU, the Governor said next step was to establish a joint committee that would implement the terms of the agreement and formally send Bills to Houses of Assembly in both States to generate statutory support for the establishment of the economic integration commission.

He said: “The common goal is to provide good governance and make life more meaningful for the electorate, and that is our driving force. We must never forget that, as Nigerians, we are all interconnected in one way or the other, and the fastest way to accelerate socio-economic growth and create an equitable society is by uniting to combat our challenges.”

Governor Abiodun, on his part, said the MoU was the resolve and deliberate methodical efforts of two “forward-thinking”States, stressing that the initiative would be a success as it was the first time Lagos and Ogun would have a formal, structured framework of bilateral engagement that would be backed by legislation.

The Governor said the MoU took cognizance of the development envisioned by the Prof. Akin Mabogunje Committee on Redeployment of Lagos Megacity Region Plan submitted to the Federal Government in 2006.

He said the the development imperatives needed to be streamlined for the two States to be focused on sustaining common goals and future growth.

Abiodun said: “The MoU we are signing is a culmination of various efforts by State and non-state actors who have seen beyond the geographical delineation of our States. We are cognizant of the fact that Ogun State is the only neighbour that Lagos has and that we are a natural overflow of Lagos. There is no way development in Lagos would not have a spiral effect in Ogun or vice versa.

“Ogun and Lagos States are like two rivers flowing onto each other. It is very difficult to identify which of the rivers is actually flowing onto the other. Institutions, such as the Nigeria Police Force, Nigerian Customs Service and others have already recognised the Siamese relationship between our two States and have always grouped Lagos and Ogun as one zone under their respective High Commands.”

Chief Economic Adviser to the Ogun State Government and Commissioner for Finance, Dapo Ogunbadejo, described the event as “a collaboration of giants”, noting that the partnership would lead to transformative progress of both States and prosperity of their citizens.

Lagos Attorney General and Commissioner for Justice, Mr. Moyo Onigbanjo, SAN, said the letters of the agreement were to create an economic hub that will be second to none in the federation.

Oba Gbadebo commended the two Governors for the initiative, describing the event as “a new beginning” for the two States in exploring their shared prosperity. The monarch said Lagos and Ogun would now jointly address issues of mutual interest, especially in transportation.