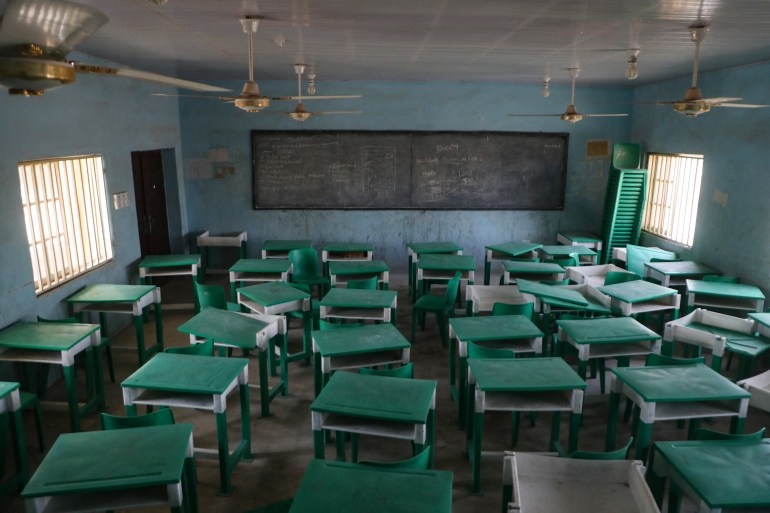 A string of mass kidnappings has resulted in the closure of 600 schools, Amnesty says, calling on the gov’t to hold perpetrators to account.

Seven years after the abduction of 279 girls from a government school in northern Nigeria, authorities have failed to find a strategy to protect schoolchildren and their right to education, according to a human rights group.

The schoolgirls were taken hostage by the armed group Boko Haram in Chibok, a town in Borno state, on April 14, 2014. While most of them were able to escape or were released, more than 100 are still missing.

In a report marking the anniversary of the mass kidnapping on Wednesday, Amnesty International highlighted how a string of recent attacks targeting students and learning institutions across northern Nigeria has resulted in the closure of more than 600 schools, with “disastrous consequences” for young people in the region.

Hundreds of students have been seized by gangs of so-called bandits in at least five separate incidents in northern Nigeria since late last year.

In December 2020, gunmen kidnapped about 300 students who were held in captivity for six nights in the northwestern state of Katsina.

Following the attack, the state governments of Katsina, Kano, Kaduna, Zamfara and Jigawa ordered the closure of schools, contributing to the number of children dropping out of school across the country, the group said.

To this today, that figure stands at 10.5 million, according to the United Nations.

“The Nigerian authorities risk a lost generation, due to their failure to provide safe schools for children in a region already devastated by Boko Haram atrocities,” said Osai Ojigho, director of Amnesty International Nigeria, urging the government to investigate the attacks and hold those responsible to account.

No one has been arrested or prosecuted for the mass abduction in Chibok, contributing to an escalation of attacks on schools and their closure, the group says.

The consequences reached beyond the level of literacy and school attendance, triggering a rise in child marriage and early pregnancy of school-age girls.

“Since many of my friends were kidnapped in school, my parents decided to give me out in marriage for my own safety,” a 16-year-old schoolgirl told Amnesty.

The government’s lack of action has also affected parents’ trust in authorities.

“The schools are not safe. The government is not trustworthy, and we do not believe them when they say that they would protect our children,” one parent was reported as saying in the report.

“Some of our children are about to write exams but they cannot continue because the schools are closed, yet the government is doing nothing to ensure that our children return to school,” said another.

Amnesty also called on authorities to restore security to schools and provide psychosocial support to victims of abductions and their families to enable them to heal from trauma and integrate back into society.

“There must be a plan to ensure that children can return to safe classrooms,” said Ojigho.