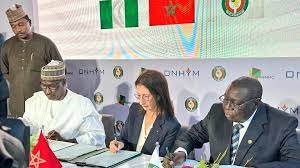 The Nigerian National Petroleum Company, Limited, NNPCL, Thursday confirmed that a final investment decision for a gas pipeline linking Nigeria to Morocco should be made in 2023.

Morocco and Nigeria announced their intention to build the pipeline in 2016 and have been carrying out feasibility studies on the project, which could ultimately involve gas exports to Europe.

“All the countries in the West African sub-region are focused on this and they want to deliver on this,” NNPC CEO Mele Kolo Kyari said.

He was speaking at a ceremony in which Nigeria, Morocco and the Economic Community of West African States (ECOWAS) signed a memorandum of understanding to advance the project.

The region’s three landlocked countries, Burkina Faso, Mali and Niger, could also be linked to the offshore pipeline, he said.

Gas from Ghana, Ivory Coast, Senegal and Mauritania could be exported through the pipeline, he said.