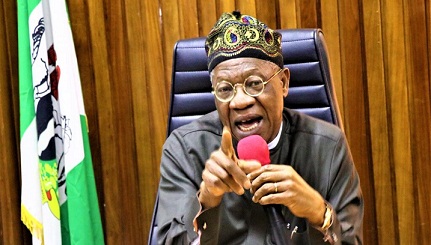 The Federal Government has warned that fake news is a ready made tool to create tension and destabilize the country.

Minister of Information and Culture, Lai Mohammed, who dropped the hint also said

that fake news and disinformation constitutes a clear and

present danger to the 2023 election and if not checked, can also have a negative impact on our nation’s ongoing fight against terrorism.

Speaking at the 10th edition of PMB Scorecard series in Abuja on Monday, Mohammed recalled how an international news agency recently

reported that the Nigerian military, in their fight against Boko

Haram/ISWAP, has been running a secret, systematic and illegal

abortion programme in the Northeast.

insurgents are predestined, by the blood in their veins, to one day

take up arms against the Nigerian government and society’.

The story also claimed that 10,000 such abortions have been carried out from

According to him, the news agency made this grave

allegation without a scintilla of evidence, citing only anonymous

sources and the reported review of phantom ‘documents’.

and girls, but Mohammed wondered how an interview with 33 women and girls could possibly come to a bogus claim of 10,000 abortions, adding that “And in a further indication that the figure of abortions quoted was arbitrary or possibly conjured, the agency first put the figure at 12,000 before settling for 10,000.

He categorically denied the report saying there is no ‘secret, systematic and illegal abortion programme’ being run by our military in the Northeast or anywhere across the country.

at our military,  We state categorically that this story is a scary

instance of fake news and disinformation combined. The writers deserve

an award in fiction writing.”

in uniform have been recording successes after successes, decimating

the terrorists, rescuing abducted persons and receiving hundreds of

thousands of terrorists who have surrendered.

For the record, Mohammed said the Nigerian military has rescued 11 Chibok girls with all their children, 2,018 other persons (comprising 339 adult males, 660 adult females and 1019 children), while 82,645 persons, comprising 16,621 male fighters,

Furthermore, he said the military has also neutralized 494 terrorists (note that this does not include terrorists neutralized through airstrikes and terrorists’ infighting).

He asked, “Why is this news agency not playing up these positive news but instead

chose to give prominence to a phantom abortion story? Is this a ploy

to demoralize and distract our fighting forces? Is it a strategy to

to crushing terrorists? Only the news agency can answer these

questions. But we stand by our military, which has served

meritoriously at home, and at regional and global peacekeeping

“We know that military operations in the Northeast are not arbitrary but based on the military’s Standard Operating Procedure (SOP) and Rules of Engagement (ROE), among others.

soldier, the law has always taken its course. But it is beyond the

pale and downright dangerous to accuse a nation’s military, without

any verifiable evidence, of massive illegal abortions and infacticide”