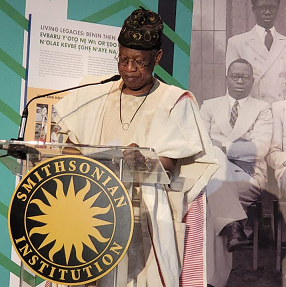 The Minister of Information and Culture, Alhaji Lai Mohammed, speaking at the Benin Bronzes’ repatriation ceremony at the Smithsonian Institution in Washington, DC, Tuesday

The Minister of Information and Culture, Alhaji Lai Mohammed, has commended the United States for the repatriation to Nigeria of 23 Benin Bronzes, part of the thousands of artifacts that were looted by the British during their invasion of Benin Kingdom in 1897.

The Minister gave the commendation at the Benin Bronzes’ repatriation ceremony in Washington, DC, on Tuesday

”Please permit me, on behalf of the government and people of Nigeria, to most sincerely thank the United States and her major cultural heritage institutions for the return of these highly-cherished Benin Bronzes to Nigeria – which is the reason we are here today,” he said.

”These artifacts are intrinsic to the culture that produced them. A people ought not be denied the works of their forebears. It is in the light of this that we are delighted with today’s repatriation of the Benin Bronzes,” Alhaji Mohammed said.

He thanked the Boards of Trustees of the Smithsonian National Museum of African Art, the National Gallery of Art and the Rhode Island School of Design for engaging in the discussions with Nigeria’s National Commission for Museums and Monuments that led to the repatriation of the artifacts.

The Minister disclosed that Nigeria will soon launch an international traveling exhibition with the artifacts being repatriated ”in a manner that will win more friends and promote greater goodwill for Nigeria and the ethnic groups that produced the artifacts”.

Campaign For The Return and Restitution of Nigeria’s Looted/Smuggled Artifacts from around the world, which was launched in November 2019.

”We have also received or are in the process of receiving repatriated artifacts from The Netherlands, the University of Aberdeen in Scotland, Mexico, the University of Cambridge in the United Kingdom and Germany, among others,” Alhaji Mohammed said.

He recalled that Nigeria and the US have signed a bilateral cultural property agreement to prevent illicit import into the United States of some categories of Nigerian artifacts.

”This agreement solidifies our shared commitment to combat looting and trafficking of precious cultural property, while also establishing a process for the return of trafficked cultural objects, thus reducing the incentive to loot sites in Nigeria,” the Minister said.

In his remarks, Lonnie G. Bunch III, Secretary of the Smithsonian, said the Institution was “humbled and honored to play a small role in transferring ownership of the art works to Nigeria”, adding that ethical consideration should be at the heart of what Smithsonian as an institution does.

The returned artifacts comprise 21 from the Smithsonian and one each from the National Gallery of Arts and the Rhode Island School of Design.

Also at the ceremony were the Director-General of Nigeria’s National Commission for Museums and Monument, Prof. Abba Tijani; Prince Aghatise Erediauwa, Representative of the Oba of Benin; Ngaire Blankenberg, Director of the US National Museum for African Art (NMAfA) and Kaywin Feldman, Director, US National Gallery of Art (NGA).