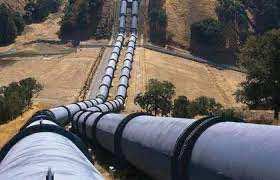 The the political scientist and head of the Atlas Center for the Analysis of Political and Institutional Indicators, Mr. Mohamed Bowden, has said that the Dakar-Nigeria-Morocco gas pipeline is of paramount importance as a major route for large-scale, cross-border development and integration, and is a strategic initiative aimed at enhancing the energy security of African and European countries.

The logical vision of the project is not to reduce distances, but to turn it into a path of development and improve the lives of nearly 400 million people, because a project of this magnitude should be a lifeline, underlined in an article published by a Moroccan political scientist. Senegal portal “reveildakar.info”.

Both countries may have imagined a gas pipeline project from Nigeria to Morocco and only through the four states of Niger, Mali and Mauritania or Benin, Burkina Faso, Mali and Mauritania. However, taking into account the Moroccan-Nigerian vision for security and stability related to the pipeline and the potential for broader integration and sustainable development in West Africa, which includes 11 countries, Mr. Buten noted.

Recent international developments have given strategic importance to energy resources and contributed to the coordination of the strategic, economic and geopolitical significance of the Nigeria-Morocco gas pipeline project, which is the result of the common interest of the two leading countries on the continent.

During King Mohammed VI’s visit to Nigeria in 2016 and his talks with Nigerian President Mohammed Buhari, the political scientist added.

He noted that the economic benefits of the Nigeria-Morocco gas pipeline project reflect the Kingdom of Morocco in strengthening and diversifying choices and alternatives in the energy market, while noting that this massive project for Nigeria will significantly boost the country’s GDP. These pipeline countries will be able to generate enough electricity for domestic consumption, production activities, agricultural activities, agricultural production, as well as to create jobs and improve the living conditions of the people.

In a more global framework, the project accelerates the implementation of the vision of the Tangier-Lagos Trans-African Highway and enhances the potential for redressal of the causes of irregular migration from other countries and helps to reduce pollution and promote a cleaner industry. Improves security and stability, he said.

The project will no doubt give a new impetus to Morocco economically, politically and economically on the African continent, and will no doubt strengthen the position of the Kingdom of Morocco as a leading African country in investing in Africa. Morocco’s strategic position provides access to many important regional and continental players and extends beyond the African continent, especially as the Nigeria-Morocco gas pipeline project represents a strategic vision beyond 5660 km north.

At the geopolitical level, the voices of Morocco and Nigeria are heard by various international actors who speak in terms of the energy that supports this future project, he pointed out, confirming that the Kingdom aims at a three-dimensional strategy. A key alternative is to strengthen the domestic energy market and, on the other hand, to create a complementary model between North Africa and the West, as well as to secure the passage of vital gas between Africa and Europe based on the logic of equilibrium and mutual benefit.

In terms of partnerships and investors, the project definitely needs international partners from both the public and private sectors. Bouden pointed out that this represents the framework for a long-term partnership and collective action to accelerate economic growth.

It may be recalled that Nigeria’s Petroleum Resources Minister Dimitri Silva explained last Monday that the Nigeria-Morocco gas pipeline project is an extension of the West African gas pipeline project and will already carry gas from Nigeria to Ghana. It is in the process of looking for research and financial partners to take it to Morocco, which is connected to the European market.

“We would like to continue the same gas pipeline along the coast to Morocco. Silva announced.

He revealed that the Organization of the Petroleum Exporting Countries (OPEC) and Russia are among the international organizations willing to invest in the Morocco-Nigeria gas pipeline project.

However, the minister stressed, “We have not yet fully finalized the financial arrangement. There is a lot of international interest, investor interest in the project, but we do not really identify the investors we want to work with.

“Currently, the two investors in this project are Nigeria and Morocco, the two countries we are ready to work with to build this gas pipeline,” he pointed out.

The Moroccan-Nigeria gas pipeline mega project, whose feasibility study was launched in May 2017 at a cost of billions of dollars, was launched during the official visit of HM King Mohammed VI to Abuja in December 2016, and a related agreement was signed in June. 10, 2018, during the Rafat visit of Nigerian President Mohammed Buhari.