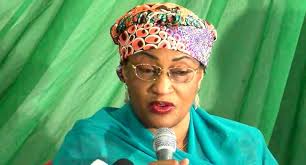 The Minister of Women Affairs and Social Development, Aisha Abubakar has revealed that six million girls under 15 were married in 2015.

She made the disclosure in her address at a Programme to celebrate this year’s Universal Day of the Child which took place at the School ofthe Gifted, Gwagwalada, Abuja.

The Programme, which had: “Children are taking over and turning the world blue” was organised by an international nongovernmental organisation, Save the Children in collaboration with the ministry.

The minister, who was represented by Deputy Director, Child Development in the ministry, Ali Madugu, said a 2015 situation analysis showed that 36 million Nigerian girls married before the age of 18, adding child marriage remained a major developmental challenge affecting Nigeria.

The minister said: “Children form an appreciable size of our population. The rate of child poverty remains high, with children experiencing two or more deprivations of their basic needs. Hunger and poverty therefore remain major concerns for our children.

In his remarks, Director of Advocacy and Campaigns, Save the Children, Amanuel Mamo, urged governments at all levels to prioritize girls access to health, education and protection programmes as this will help to curb child marriage in the country.

Mamo said: “Save the Children is calling on governments to step up their efforts to develop and implement action plans that include full access to health, and protection for girls. These plans must be fairly financed and must incorporate a strong focus on education.

“We call for a stronger coordination and effective responses across the education, health, nutrition, protection, economic and justice sectors in order to improve the lives of many disadvantaged girls and boys.

“Save the Children urges for an increased investment in improving the quality of and access to primary and secondary education in particular, as well as the development and implementation of a multi sectoral action plan to strengthen girls equal access and completion of quality education that empowers them to make an informed decision on issues that affect them.”