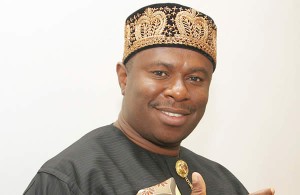 The Director-General of the Nigerian Maritime Administration and Safety Agency (NIMASA), Dr. Dakuku Peterside, says government is beefing security around her water ways and as such seafarers and other members of the international community should not express fears about their security.

Dakuku said this in Lagos when the Consular-General of the Korean Embassy in Nigeria, His Excellency, Kim In-Taek, paid him a courtesy visit at the NIMASA headquarters.

The Director-General who was responding to concerns raised by the Consular-General about the recent hijack of MV. Glarus, stated, “Nigeria is totally committed to the safety of all vessels that come on its coastal waters. Efforts have been doubled to ensure that vessels calling at Nigerian ports are safe and secure by investing even more in surveillance to guaranty safety of vessels. NIMASA is working closely with the Nigerian Navy and the National Intelligence Agency”.

He noted that Nigeria was expected to witness a drastic drop in maritime crimes with the additional security measures being put in place by the agency, saying the country ultimately aims to completely rid its coastal waters of pirates and other criminals.

It should be noted that the Dr. Dakuku Peterside led NIMASA has always advocated local and foreign collaborations in growing the Nigerian maritime sector. This move is seen as a milestone in partnering with the Koreans who are known for Shipbuilding and repairs.

Worthy of note also was when the Norwegian Ambassador to Nigeria Mr. Jens Kjemprud visited the Agency to seeks partnership especially as it concerns the fishing aspect of maritime which Norway is reputed for.