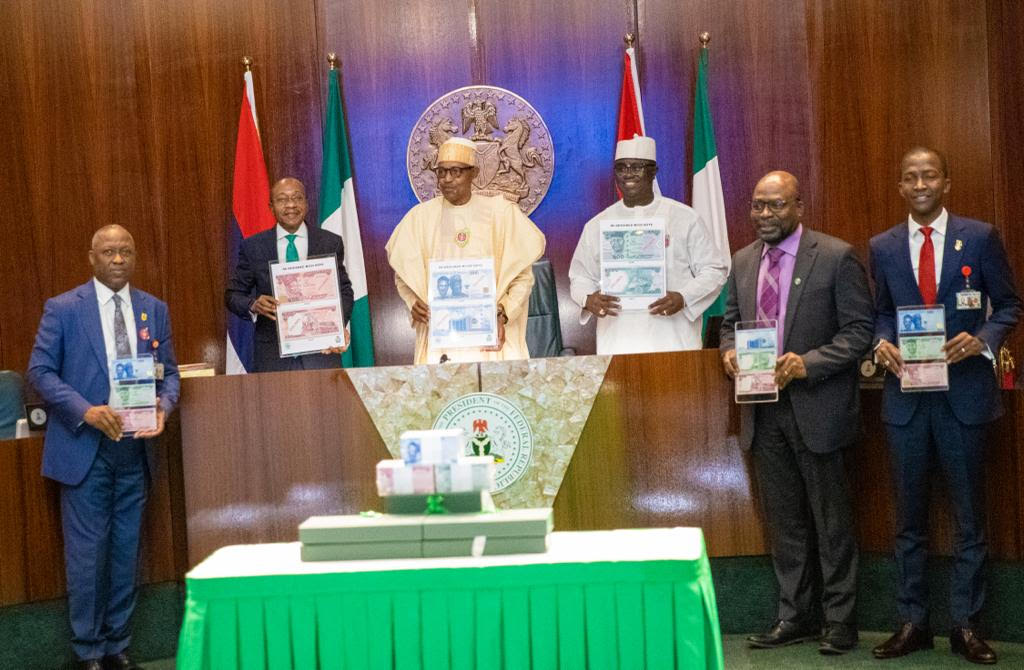 Governor of the Central Bank of Nigeria, Godwin Emefiele, is confident that Nigeria will overcome rising inflation rate with the currency redesign.

At the unveiling of the new Naira notes in Abuja the Governor confidently noted that the exercise comes with enormous benefits to the Nigerian economy.

According Emefiele, This policy will help to control inflation as the exercise will bring the hoarded currency into the banking system, thereby making monetary policy more effective.

He said it will also help with better design and implementation of Monetary Policy as the bank would have much more accurate data on money supply and monetary aggregates.

“We believe that this exercise would help in increasing financial inclusion, moving towards a more cashless economy, and ensuring greater formalization of the Nigerian economy.

“The currency redesign would assist in the fight against corruption as the exercise would rein in the higher denomination used for corruption, and the movement of such funds from the banking system could be tracked easily.” Emefiele added.

Reading a prepared speech the Governor said, “I am happy to be here today at the official launching of the new Naira banknotes ;as this event this morning marks a major milestone in our efforts to solve the numerous challenges facing the management of our legal tender currency with the unveiling of the three redesigned denominations of N1,000 , N500 and N200. I would like to talk about the need for the currency redesign, its benefits, the features of the new Banknotes and the unwavering support of Mr President to the CBN.”

Continuing, he said, “As we are all aware, currency management is a key function of the Central Bank of Nigeria, as enshrined in Section 2 (b) of the CBN Act 2007. Indeed, the integrity of a local legal tender, the efficiency of its supply, as well as its efficacy in the conduct of monetary policy are some of the hallmarks of a great Central Bank.”

In recent times, however, currency management in Nigeria has faced several challenges that have continued to grow in scale and sophistication with unintended consequences for the integrity of both the CBN and the country, he added listing some of these challenges to include, significant hoarding of banknotes by members of the public, with statistics showing that ₦2.72 trillion out of the ₦3.26 trillion currency in circulation as of June 2022 was outside the vaults of commercial banks across the country, and supposedly held by members of the public.

This statistic shows that 84.71 percent of currency in circulation are outside the vaults of commercial banks, with only 15.29 percent in the Central Bank and Commercial banks’ vaults.

Second, he added is the worsening shortage of clean and fit banknotes with attendant negative perception of the CBN and increased risk to financial stability while the third is increasing ease by criminals and risk of counterfeiting evidenced by several security reports received at the Central Bank of Nigeria.

He further added that although global best practice is for central banks to redesign, produce and circulate new local legal tender every 5–8 years, the Naira has not been redesigned in almost 19 years.

“On the basis of these trends, problems, facts and benefits of currency redesign, and in line with Section 2(b) Section 18 and Section 19, Subsections (a) and (b) of the CBN Act 2007, the Management of the CBN sought and obtained the approval of President Muhammadu Buhari to redesign, produce, and circulate new series of banknotes at ₦200, ₦500 and ₦1,000 levels.” confirmed Emefiele.

He went on saying, “After obtaining Mr President’s approval, the CBN directed the Nigerian Security Printing and Minting Company to begin printing the new banknotes. The redesigned ₦200, ₦500 and ₦1000 banknotes will have the following features.

Emefiele, said the ability of the Central Bank of Nigeria to initiate sound policies that positively impact Nigerians and support economic growth, such as the currency redesign policy, is due to the independence of the Central Bank.

“I will like to also emphasize that the independence of the Central Bank of Nigeria, although codified in the Law, would not have been possible without the full support of President Muhammadu Buhari who has made this policy initiative possible and successful.

“Indeed , Mr President, only President of your esteemed and incorruptible stature could have done what we are witnessing today. We say this because instead of redesigning in 5 to 8 years , we delayed for almost 19 years. And for this, we are exceedingly grateful, Mr. President.

“Most importantly Mr President , in order to test the capacity of the Nigerian Security Printing and Minting Company, you insisted that the first set of these currencies MUST be printed in Nigeria. We thank Mr President for your unflinching confidence in the Nigeria Mint. We also thank the Staff and Management of NSPMC for living up to expectation by working tirelessly to actualize Mr President’s directives to print locally.

“I would also like to thank my colleagues at the Central Bank of Nigeria for their painstaking work on this project and other programs. My gratitude also goes to the Managing Director, Nigerian Security Printing and Minting Company, Mr. Ahmed Halilu and his team. I also appreciate the taskforce on the new Naira banknotes including my Deputy Governors, the CEO of Access Bank, Guarantee Trust Bank, Unity Bank, First Bank and Fidelity Bank.

“I also thank all the bank CEOs in the Bankers Committee; the representative of the Fintech Association , the Chairman of the Economic and Financial Crimes Commission (EFCC); the National Security Adviser; the Director, Nigerian Financial Intelligence Unit (NFIU); the Inspector-General of Police and his team; the representatives from the President’s office and all other stakeholders that have contributed in no small measure to making this day possible.” he concluded