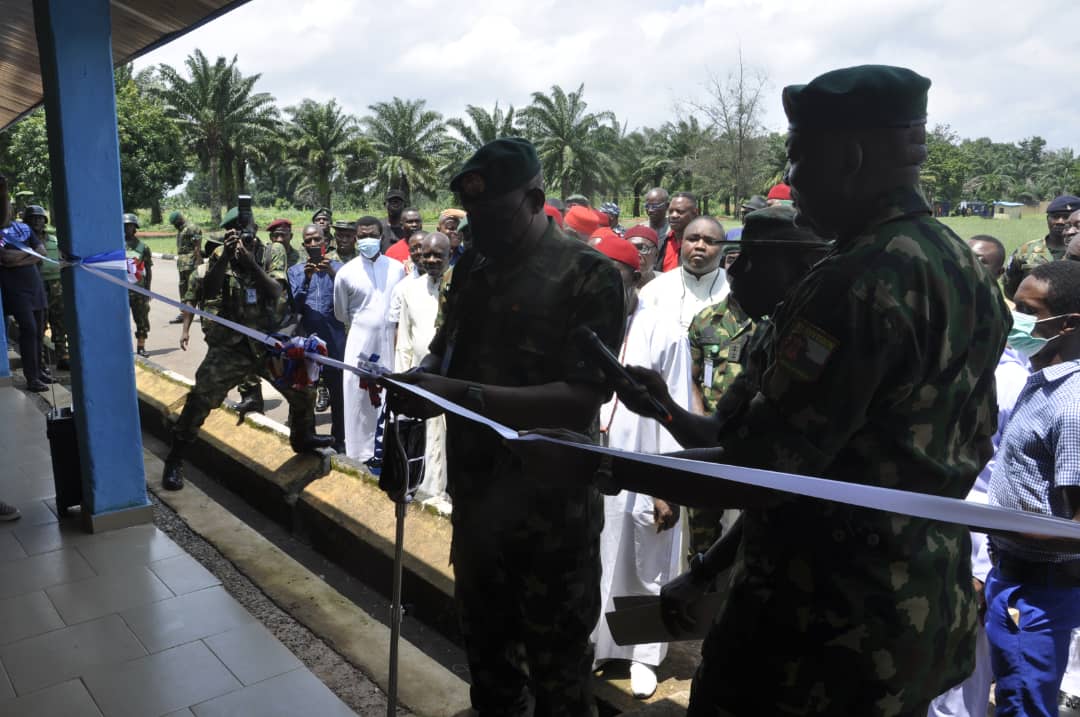 The Nigerian Army (NA) has commissioned a renovated block of 5 classrooms and fenced the entire Saint Pius Xth Grammar School at Aniocha North Local Government Area (LGA) of Delta State, as part of the non-kinetic effort of military operations to ensure cordial relations with host communities where the military operate.

The Chief of Army Staff Lieutenant General Faruk Yahaya represented at the occasion by the General Officer Commanding 6 Division NA/ Commander Land Component Operation Delta Safe Major General Sani Gambo stated that the project was aimed at providing a conducive ambience for teaching and learning for teachers and students of the Saint Pius Xth Grammar School.

He noted that the COAS would continue to pay close attention to the non- kinetic aspects of military operations by enhancing good and cordial relationship with the host communities where the military operate.

Major General Sani Gambo further disclosed that the project was initiated and supervised by the General Officer Commanding 81 Division Nigerian Army Major General Lawrence Fejokwu who was an alumnus of Saint Pius Xth Grammar School.  He further urged other senior officers to emulate the kind gesture of the GOC 81 Division.

Speaking at the occasion, Major General Fejokwu noted that he was inspired  to embark on the project as a result of his desire to give back to his alma mater. He added that it took him 4 years to accomplish the project.

He further expressed optimism that the project would alleviate the infrastructure deficit in the school and further foster the peace, progress and indeed bring socio-economic development to the community. The GOC 81 Division also used the occasion to appreciate the COAS for his support and the Obi of Onicha-ugbo HRM Obi Victor Chukwumalieze 1, for the fatherly guidance he provided in the course of executing the project.

Earlier, Major General Fejokwu flagged off a Medical Outreach at Onicha Ugbo Community, Aniocha LGA as part of Civil-Military Cooperation activities to commemorate the commissioning of the project. The beneficiaries who turned out in hundreds were tested on blood pressure, sugar level, HIV, as well as tooth and sight related illnesses. Medications were administered to those diagnosed. Treated mosquito nets, eye glasses among other items were also distributed.