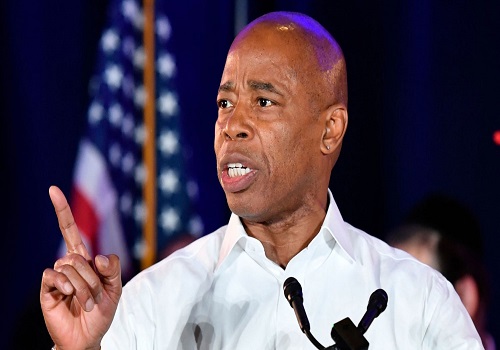 The Consulate-General of Nigeria in New York has congratulated the New York City Mayor-elect, Eric Adams, on his election as the 110th Mayor of New York City.

The Consul-General, Amb. Lot Egopija, in a congratulatory letter signed and made available to the News Agency of Nigeria (NAN) in New York, said Adams’ election was a testament of his acceptance.

Egopija added that Adams’ historic victory at the just-concluded election was a testament to the diverse coalition his campaign built and the popularity and acceptance of his candidacy across diverse groups in the U.S.’ most populous City.

“The Consulate-General notes the overwhelming support of our nationals who endorsed your candidacy and their commitment and dedication to your victory, which speaks highly of the confidence reposed in your leadership,” he said.

“The Consulate-General wishes to express its determination to work with you in the areas of trade, culture and consular issues.

“Consulate-General also looks forward to partnering with the Mayor’s Office in various other ways to further the interests of Nigeria and Nigerians in the City.”

Egopija also renewed the Consulate-General’s invitation to the Mayor-elect as a Special Guest at the Second Edition of the Nigeria Cultural Show on December 3.

The Correspondent of the News Agency of Nigeria (NAN) reports that Adams, who will be the second black Mayor of the City, defeated the Republican candidate, Curtis Sliwa.

It would be recalled that the Nigerian Community under the aegis of Nigerian Forum, co-convened by the Organisation for the Advancement of Nigerians (OAN) and the Nigerian-Americans Public Affairs Committee (NAPAC), had endorsed Adams in June before the primary election.

Adams, at a meeting with the Nigerian community after he won the primary, consequently pledged to include Nigerians in his administration.

“We don’t only want you to help us when we need you to govern, we want members of your community on the Transition Team as we figure out policies and people to move our City forward.

“I can’t thank you enough for your commitment and dedication. For you were clear that I was your candidate and you committed to this victory we are celebrating right now,” he said

Also, at a fundraising organised for him by the Nigerian Community in New York, he pledged to establish sister city agreements between New York and Lagos.

Chairman, Board of OAN, Mr Yinka Dansalami, had also told NAN that the Nigerian community raised more than US$ 33,000 to support Adams.

Dansalami said the Nigerian community surpassed the minimum amount of US$ 25,000 set for communities. (NAN)