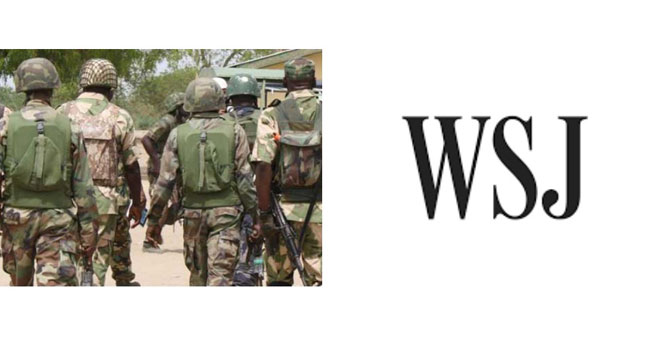 The Wall Street Journal (WSJ), has made a startling revelation claiming that the Nigerian Army has been burying scores of soldiers in secret unmarked graves, in a bid to cover up the casualty figures in the ongoing war against insurgency within the North East.

According to the report, at the northern edge of Maiduguri city’s sprawling military base, a vast field of churned soil conceals the hidden toll of a deadly offensive by the allies of Islamic State.

The report states further that after dark, the bodies are covertly transported from a mortuary that at times gets so crowded the corps are delivered by truck.

“According to Nigerian soldiers, diplomats and a senior government official. The bodies are laid by flashlight into trenches dug by the infantry men or local villages paid a few dollars per shift”.

WSJ says its report is based on accounts from Nigerian soldiers, diplomats and a senior government official.

A soldier who spoke from the Maimalari barracks is quoted as saying, “Several of my comrades were buried in unmarked graves at night,” where more than 1,000 soldiers are based. “They are dying and being deleted from history.”

The secret graveyard at Maimalari isn’t the only one in Nigeria’s troubled northeast, said the senior government official quoted by WSJ.

In its defense the Defence Headquarters in a statement on its verified Twitter handle on Thursday and signed by Director, Defence Information, Colonel Onyema Nwachukwu, said the Armed Forces does not engage in secret burials for its fallen heroes.

“This insinuation can only emanate from an uninformed position of the author of the said publication. It therefore becomes necessary to inform the public that the Armed Forces of Nigeria has a rich and solemn tradition for the interment of our fallen heroes. Therefore, it must be unambiguously clarified that the Armed Forces of Nigeria does not indulge in secret burials, as it is sacrilegious and a profanity to extant ethos and traditions of the Nigerian military,” the statement read in part.

“In tandem with the traditions of the Armed Forces, Fallen heroes are duly honoured and paid the last respect in befitting military funeral of international standard, featuring funeral parade, gravesite oration, solemn prayers for the repose of departed souls by Islamic and Christian clerics, as well as gun salutes, aside other military funeral rites.

“The cemetery described in the publication, which is situated in Maimalari military Cantonment is an officially designated military cemetery for the Armed Forces of Nigeria in the North East theatre, with a Cenotaph erected in honour of our fallen heroes. The official cemetery has played host to several national and international dignitaries, where wreaths were laid in honour of the fallen heroes. It is, therefore, a far cry from the sacrilegious impression being painted by “Wall Street Journal”.

The Defence Headquarters, therefore, urges members of the Armed Forces and the general public to disregard such a misinformed publication and see it as a figment of the imagination of the writer, whose knowledge of military valued ethos and traditions is grossly misplaced.

The WSJ had in an article titled, “Nigeria Buries Soldiers at Night in Secret Cemetery” alleged that the military buried soldiers in unmarked graves in the North East.

The subtitle of the article read, “While president says war against Islamist insurgency is won, army conceals toll in unmarked graves”.