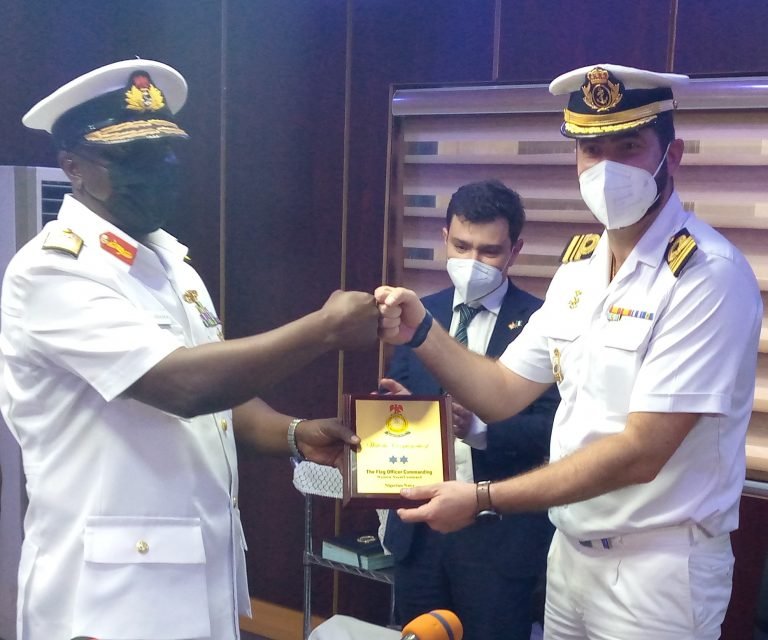 The Flag Officer Commanding (FOC) Western Naval Command, Rear Adm. Jason Gbassa on Tuesday said that two foreign Navies would be collaborating with the Nigerian Navy to deal with rising incidence of piracy in the Gulf of Guniea.

Gbassa said this to Newsmen while receiving delegates from the Italian Naval Ship Antonio Marceglia and French Naval Ship Commandant DUCUING during their courtesy visit to the command.

He said that the two-day exercise scheduled to hold from Oct. 6 to Oct. 7 would help address the issues of maritime crime, drug trafficking, human trafficking among others in our waterways.

“Piracy, Sea robbery and all forms of criminalities on the waterways are a threat to international trade, a threat to relations between nations and even a threat to life.

“It is in recognition of this that the Nigerian Navy, knowing the global nature and effect of this criminalities collaborate with foreign allies to strategise in curbing such criminalities.

“It is going to be a combined sea exercise involving three nations which will involve our surface assets and air assets over two days,” he said.

The FOC said that the scope of the exercise had been expanded and that it would involve five Nigerian Naval Ships, helicopters and the Special Boat Service (SBS).

“The history between our countries has been cordial and strong particularly in security within the context of the subregion and the Gulf of Guniea and your presence in Nigeria cannot be denied.

“The issues we have around the Gulf of Guniea in the negative sense constitutes a threat to international trade and the regional peace.

“We are glad to have the Italian Navy and French Navy collaborate with us to help us attend to and resolve these issues,” Gbassa said.

He said that the exercise will give the three Navies insight about providing security within the Maritime domain and particularly address the disturbing incidence of piracy and sea robbery within the maritime space.

“We have a present concern in the Gulf of Guniea which if not well addressed, will affect your own economic interest in this part of the world.

“All efforts will be made to make sure that the criminalities in our waterways is reduced to the bearest minimum and eventually eradicated.

“We hope that this exercise will help to further reduce these incidents which has drastically been reduced over the last few months,” the FOC said.

Gbassa said that he hoped to have more of such visits in the future and endorse for trainings of personnel between the navies for the benefit of the participating Nations.

“We hope that the relations we have established particularly in the area of security where our militaries train together from the tactical level to the operational level be sustained.

“Other areas that we can build on, we will explore and look forward to maintaining our relationship that will be beneficial to our nations,” the FOC said.

Also speaking, the French Consul General to Nigeria, Mrs Laurence Monmayrant said that the French Naval Ship, Commandant DUCUING was a 93 metre long vessel with a crew of 105 and powerful intervention needs.

Monmayrant said that the common goal was to fight against insecurity and criminal activities in the Gulf of Guniea in order to secure international trade on such a major maritime route.

“For over 30 years, the French Navy has been present on the African West coast as part of the Yoande convention.

“Since 2013, the Yoande convention has moved on to a new dimension to deter criminal activities encountered in this maritime region such as illegal fishing, drug trafficking, armed trafficking and even human trafficking.

“This exercise includes different operations of interception of pirates, tracking of smugglers, rescue actions and even diving among other operations,” she said.

Also speaking, the Italian Consul General to Nigeria, Mr Maurizio Busanelli said that the exercise was important because it would help to save lives and protect global trade growth.