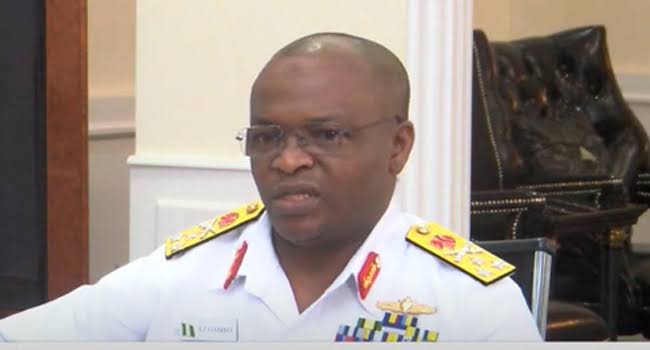 A new twist has emerged in the claims and figures about the volume of crude oil being stolen in the country.

The Chief of Naval Staff, Vice Admiral Awwal Gambo, has described as unrealistic and impossible the estimated amount of stolen crude oil in the country.

The Group Chief Executive Officer of the NNPC Limited, Mele Kyari, had in April disclosed that Nigeria lost $4 billion to oil theft at the rate of 200,000 barrels per day in 2021.

Kyari, said the country already lost $1.5 billion so far in 2022 because pipeline vandalism has escalated.

In a twist and swift reaction Naval Chief described the figures as too high, stressing that losses from other factors may have been added to the figures.

Gambo stated these during an interview on Channels Television on Monday.

He said, “We need to understand the difference between oil theft and oil loss. While oil theft is siphoning crude oil from vandalised pipes into barges, oil losses occur when there is known production, especially during shut-ins and force majeures, not allowing the Federal Government to earn the desired revenue it should.

“Also, losses occur as a result of metering errors on the operating platforms.

“However, the volume of crude oil shut-ins from non-production figures is often added to oil theft instead of declaring them as oil losses.”

Gambo further explained that to take such a huge amount of crude oil out of the country, a five-ton barge must make at least 3,160 trips in a day.

He added, “Some sources also claim that about 20, 000 to 200,000 barrels per day are stolen. Most of these claims are definitely outrageous and unrealistic.

“Let’s analyse this. A 100,000 barrels of crude oil is equivalent to 15.8 million litres, which will require a five-ton barge to make 3,160 trips in a day to convey these products out of the creek.

“Let us agree that you have many barges because of the time required to carry out these products. That means you will entirely close the navigable waters heading out to sea, through the estuaries to embark them or transship them into a mother vessel that will eventually take them out of the country,” Gambo stated.

He also said the heavy presence of security operatives in Nigerian waters makes it difficult for such a barrel of crude oil to be stolen from the country.

Gambo said, “This is, of course, most unlikely considering the increased presence of security operatives in the maritime environment as well as the deluge of the subsisting operations of Dakata De Barawo by the Nigerian Navy.”

Oriental News Nigeria reports that the NNPC has maintained that the country is losing 200,000 barrels of crude oil a day because of theft and vandalism.

Kyari, said this is monumental underscoring how insecurity is causing vast financial losses for the country.