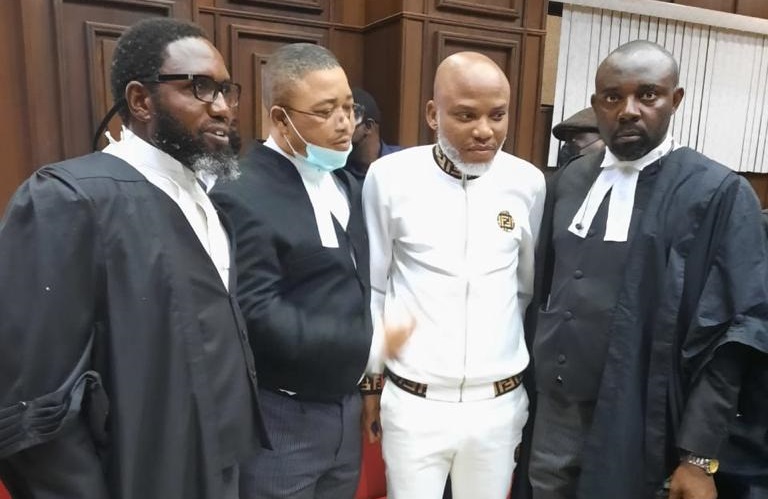 The main counsel to the leader of the Indigenous People of Biafra (IPOB), Nnamdi Kanu, Barrister Ifeanyi Ejiofor, has demanded his clients case be moved to a neutral court saying he no longer believed in Justice Binta Nyako’s impartiality in his client’s case.

Ejiofor told Arise TV on Wednesday that he will apply for the judge to excuse herself from the case.

He said he wants the matter to be “assigned to another court, a more neutral court”.

Regarding the adjournment of Kanu’s case to January 19, he expressed the view that the judge should have adjourned the case for one or two days rather than till next year.

“Obviously, my client and my legal team have no confidence in the court to proceed with the hearing of this case. Going forward , we are activating processes to urge my lord, today and tomorrow, to recuse herself from this case, so that Chief Judge can give directive to that effect. It is clear that she is partial,” he said.

Recall that the federal government had instituted a seven count fresh charges bordering on treason and terrorism against Kanu.

But his defense team had filed an application challenging the amended charges and the jurisdiction of the court to try his client on those grounds.

The case was supposed to be heard in the court of Justice Nyako on Wednesday.

But the judge adjourned the case to January 19, 2022 following Kanu’s lawyers’ absence in the court room during the time of proceeding.

Before the judge entered the court, Ejiofor went outside the courtroom to insist that his American co-lawyer, Bruce Fein, should be allowed in.