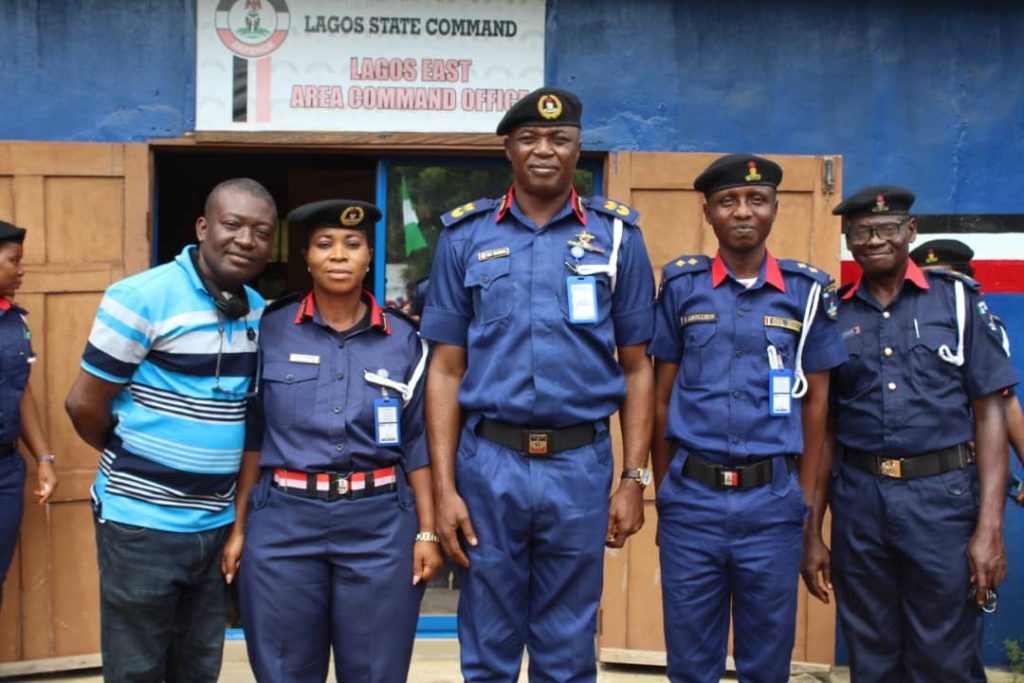 In the bid to consistently, engage the proactive gear and improve upon the security architecture in Lagos State, the Commandant Nigeria Security and Civil Defence Corps, Lagos State Command, Commandant Eweka Douglas Okoro Msc ACMA ANAN, has deemed it fit to embark on familiarization visits to different formations of the Corps, the Military, Police and paramilitary agencies and other relevant government agencies and stakeholders in the state.

The Familiarisation visit also featured commissioning of platform (quarter guard) by the Commandant, award presentation to the Commandant and the Volunteers of the Corps and sports presentation amongst other things, at the Lagos East Area Command of the state.

The Commandant, in his opening speech was elated and amazed at the level of inter-agency collaboration and synergy, which the Lagos East Area Command of the Corps, in the state has established with the Army, Police and other sister security agencies in the area.

He eulogized the Area Commander, ACC Joyce Morenikeji Adewale, divisional officers and the officers and men in the Area Command, for a job well done. He vowed to continue his leadership style, in this positive direction, in a bid to improve upon the already established excellent security architecture in the state. He also said that Lagos is known for excellence as the state of excellence and the Command will continue to render excellent security services, in the state, in line with the statutory mandate and functions of the Corps.

Eweka also had meetings with the heads of the Army, Police and other security agencies and the Area Commander and the Divisional Officers( Lagos East Area Command ) respectively, in the Area Command office. He appealed to them to maintain the high spirit already in existence amongst them as that will result into maximum impact in securing the state at large.

The Commandant, also in his line of duty received the executives of the Lagos State Independent Electoral Commission (LASIEC), led by its Chairman, Honourable Justice Ayotunde Adeyoola Phillips, in his office at Alausa, Ikeja, Lagos.

The Chairman, Lagos State Independent Electoral Commission, stated that her mission for the visit, bothers on the support of the Command in the area of security and adequate monitoring, of the forthcoming Local Government Election, in Lagos state. She stated that the election has been scheduled to hold on the 24th July, 2021, in the state. She tasked the Command to assist in identifying and reporting flash points, monitor and maintain surveillance during the election amongst other things.

The Commandant appreciated the Chairman, of the Lagos State Independent Electoral Commission and the executives of the commission, for recognizing the Nigeria Security and Civil Defence Corps Lagos State Command as one of the most significant stakeholders in election monitoring and electioneering process in general in the state. He stated that the Corps has been known for excellent performance in the conduct of elections at national, state and local levels to the admiration of the nation and the Nigerian people. He further vowed to render maximum support to the commission and by extension the Lagos State government before, during and after the election, which is the ideal thing in the preparation for an electoral process at all levels.

Eweka used the opportunity to avow his unflinching commitment, to ensure the improvement of the security architecture and give a new impetus to the business of security in the state. He also appreciated the Lagos State government for their support to the Command and solicited for more support from the government, to enable the Command perform more effectively and efficiently, in the state.