NUPENG May Go On Strike Over Security Operatives High Handedness 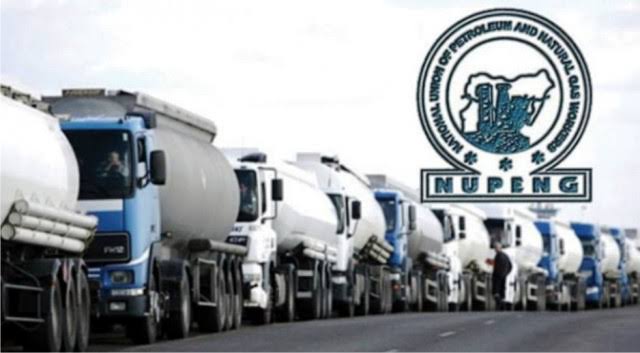 The Petroleum Tanker Drivers Branch of the National Union of Petroleum and Natural Gas Workers, (PTD– NUPENG) has threatened to embark on industrial action following what they described as illegal activities and high-handedness of security agents, particularly the Military Task Force operating in the Port Harcourt zone of the Union.

According to the PTD- NUPENG National Chairman, the trucks which lifted the black oil at a modular refinery, Walter Smith Refinery and Petrochemical Ibigwe Imo State, on Monday and Tuesday, were intercepted between Ahoada and Elele in Rivers State.

Comrade Osesua, who gave the plate numbers of the trucks as EFR 770 XA and AFZ 351 ZY, further disclosed that they were conveying 40,000 litres each of the Black Oil to Bob & Sea Depot Koko Delta State.

He said that the drivers of the two trucks were polite in their responses and presented all the necessary documents to officers of the military who ignored the documents, rebuffed appeals and burnt the trucks.

The PTD- National Chairman who presented the documents to newsmen said:” The drivers presented WayBills, NUPENG receipts, and quality control documents. But the military men still insisted that they carried crude oil. They drove the two trucks away and burnt them between Ahoada and Elele in Rivers State, on Tuesday night.

“Without investigation, without reaching out to the refinery, where the drivers mentioned that they lifted the Black Oil, the soldiers burnt down the trucks, in less than five hours.”

The PTD- NUPENG National Chairman, who also presented to journalists documents signed by Charles Okon, Refinery Manager of Walter Smith Refinery and Petrochemical, where the products were loaded said the Union has taken a decision to stop lifting products at its Port Harcourt zone.

He said the same decision to stop loading nationwide would be taken by Monday except damages incurred as a result of the high-handedness of the Military Task Force were addressed.

“Enough is enough about the high-handedness of our security agents. They should stop demonising our Union and persecuting our men who are doing their normal business. We expect that in this modern world, trained security agents should be able to identify black oil as against crude oil. We should not be at the receiving end of their ignorance”