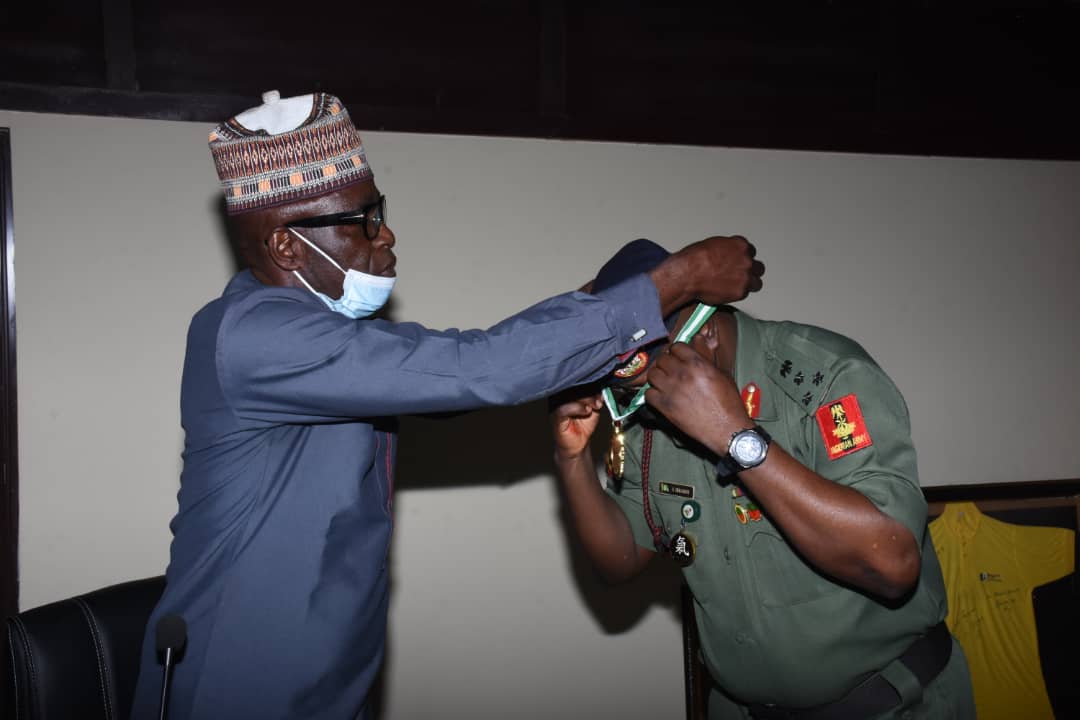 The award was in recognition of  his exemplary leadership and good conduct which resulted in many positive changes in the NYSC Scheme.

The Chairman, Board of Trustees of the Organization, Mr A O Malik who led a delegation of the Award Selection Committee to the National Directorate Headquarters of the NYSC today said the DG has achieved extraordinary feats due to his uncommon commitment to improving the lives of Corps Members and staff.

He further revealed that the committee conducted a thorough research and followed the antecedents of the General Ibrahim upon his assumption of duty as the 18th Chief Executive of the NYSC.

“Your nomination of this award, Africa Meritorious Service Award for good conduct is as a result of extra- ordinary feats, courage, exemplary leadership, loyalty, uncommon commitment and valor towards improving the life of corps members, staff welfare and positive antecedents in areas of capacity building, initiating novel and bold strands of activities in selfless service to humanity coupled with taking actions that inspired positive change. ”

Responding after receiving the award, the Director General said he was humbled by the recognition which testified to the fact that the Organization conducted a thorough background checks on him.

” You have really researched on whom Iam and what you said is a replica of exactly the person of DG NYSC ” He gladly concurred.

” When I took over as DG NYSC, I told my staff that in all we do, we should know that there is death and once an opportunity comes to you, it is a privilege from the Almighty Allah, and you think of what you can leave behind before you go” He said.

While commending NYSC Staff for their unalloyed loyalty and commitment to duty, the DG said all his achievements were recorded due to the tremendous support of staff and their proactive work ethics.

” As every day breaks, I see my Administration running down, I want to see in everyday of my life in the Scheme what I can put on the table” He pledged.

The Director General enumerated his worthwhile achievements which include improvement of staff and corps welfare, involvement of Corps members in COVID-19 Interventions, active participation of corps members in National assignments especially election duties,  Skills Acquisition,  resuscitation of NYSC Ventures and enhancement of security network for corps members among others.