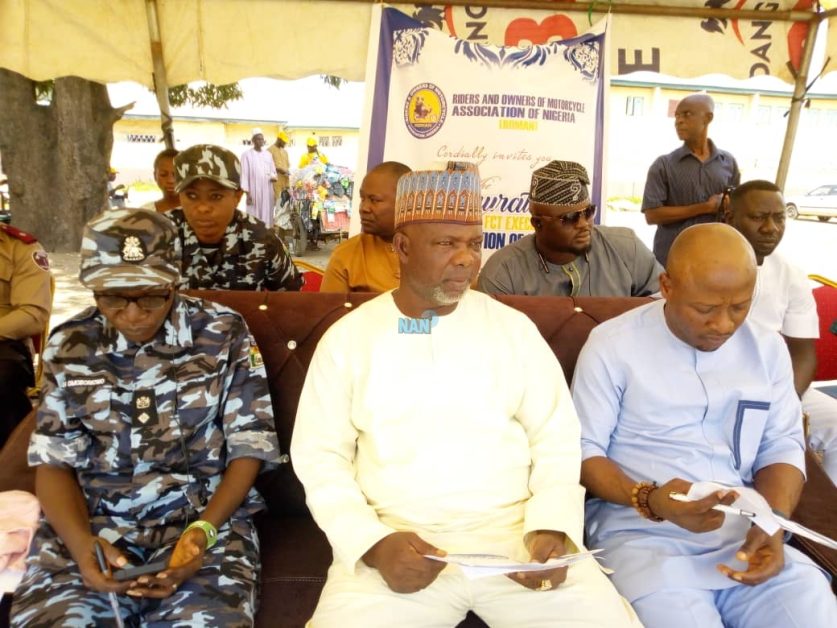 Share
Facebook Twitter LinkedIn Pinterest Email
The Riders and Owners of Motorcycle Association of Nigeria (ROMAN) in the FCT, says plans are ongoing to issue digital identification to its members.
According to the association, this will go a long way to check criminality among them.
The National President of the Union, Alhaji Olusola Razaq, in a statement on Sunday in Abuja, said this during a sensitisation meeting organised for or members at Karu, in the Federal Capital Territory (FCT).
According to Razaq, the move by the union  is to avoid outright ban by the Federal and States governments owing to unregulated activities of commercial motorcyclists in the city centre.
He said his leadership had already engaged an ICT company that would carry out a digital image capturing of all members nationwide for proper Identification.
”The reason why we are here is to inaugurate the FCT executive ahead of the national reforms as ordered by the Federal Government.
”And like I said, we have gotten a company that will create a data base for our members to ensure proper Identification of all members since there are other existing unions across the country,” Razaq said.
The  president said plans were also ongoing to seek the establishment of a National Regulation Act for the association from the National Assembly (NASS).
.
According to him, the reason why the activities of commercial motorcyclists are despised is due to unregulated operations nationwide.
”Days are gone when Okada riders are used for political thuggry. Of course we know that the new INEC electoral Act does not give room for such anymore.
”So our efforts now is to ensure that Okada riders are well sensitised like every other Nigerian who can also live their normal lives like good citizens of this country.
”We are also negotiating with the Federal Road Safety Commission and Vehicle Inspection Office (VIO) on the issue of members getting their number plates, to stop disobeying road rules, avoid road crashes and sudden deaths.
”We are also doing this to help millions of Nigerians get out of poverty because many families have waited for white collar jobs endlessly.
”So, what I am saying is that commercial motorcyclists have contributed and is still contributing in providing employment for youths.
“It will also interest you to know that we have set up National task force in each of the states we operate to ensure compliance.”
The Chairman of ROMAN, FCT chapter, Comrade Maharazu Yahaya, said the exercise was in compliance to the strict order mandating every commercial motorcycle association in the FCT to ensure proper regulations for its members or face outright ban.
Yahaya said that the inauguration of a new executive would ensure speedy response to all cases involving its members.
Also speaking, the Nyanya Area Commander, Habila Maikeffi, advised motorcyclusts to always obey road rules, with special emphasis on plying one-way to beat traffic gridlocks.
Maikeffi, while reiterating police readiness to carry out order from the FCT Police Commissioner, also advised the riders on the need to check their mental health, saying it was a bi-product of banned substances.
Maikeffi, said, “I will like you all to carry out your daily commercial operations with clean health, not under the influence of hard drugs as such makes you to cause pandemonium at every little provocation.”
Chairman of Karu Police Community Relations Committee (PCRC),  Dr Bathelomeo Agbo, urged the motorcyclists to always respect the law guiding their operations.
He appealed for proper understanding among the riders and the leaders to ensure efficacy of all regulations, as such would enable them enjoy the business of Commercial motorcycle to the benefit of their families.(NAN)