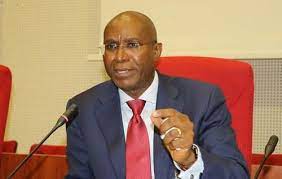 Deputy Senate President Ovie Omo-Agege has urged leaders of the All Progressives Congress (APC) in Delta to respect party supremacy.

He advised them on Monday to subsume individual’s interest and promote the party’s interests.

He made the call in a statement in Abuja, signed by his Special Adviser, Media and Publicity Mr Yomi Odunuga.

Odunuga said that the deputy senate president made the call while speaking with APC leaders from Delta South and Delta Central senatorial districts.

He said that the senate president observed that allowing party interests to override self-interest would produce a strong, vibrant and enduring party.

Speaking on the rationale behind the calls for 10 leaders per ward to determine the choice of new executives of the party at the unit and wards levels, Omo-Agege said “this is to ensure collective ownership of party structure.

“The reason we are doing this is that we want everybody to own the executive council.

“It is a collective work not the work of one person.

“In every unit we are represented since an executive council member is coming from that unit.

“What we are doing now, calls for sacrifice, forbearance.

“You cannot leave your ward and go to another ward; everybody must remain in his ward for this exercise (APC ward congress).

“Everyone has ambition and they think they can use the opportunity of this congress to secure that advantage but I have news for you: we are going to be doing direct primaries not indirect or delegate primaries.

“So the ward chairman is just as important as any other member of the party.

“But we need these people as managers of the party for the purpose of mobilisation in the general election’’, he said.

“If our eyes are on the goal, nothing sideways will distract us. I urge all party members who have ambition to contest to subsume individual’s ambition.

“Remember that the aim of this is to work at the general election, not to trade at primaries because our primaries will be direct.

“So we want to appeal that we should make that goal our end goal”.(NAN)