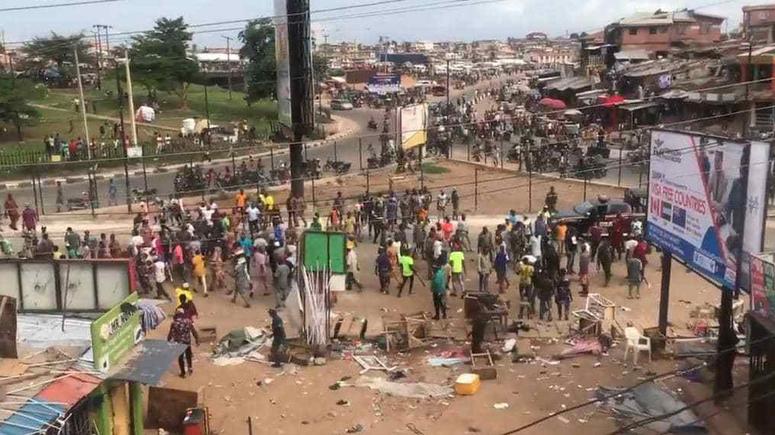 There was pandemonium around Iwo Road area of Ibadan, Oyo State capital, on Wednesday evening as some park managers allegedly clashed with some cell phone retailers, leading to killing of one person.

A witness said that one of the cell phone dealers had challenged the park managers, who are also members of the proscribed National Union of Road Transport Workers (NURTW), for blocking the main entrance of the shopping complex.

This was said to have allegedly angered the park managers, who hurriedly mobilised themselves, brandishing dangerous weapons, and unleashed mayhem on the cell phone retailers.

The News Agency of Nigeria (NAN) reports that a shopping complex were vandalised, while cell phones and their accessories, among other valuables, were destroyed in the process.

A witness, who pleaded anonymity, told NAN that one person was left dead, while many others sustained injuries.

NAN also reports that the crisis disrupted business activities in the area.

The shop owners hurriedly closed their shops to avoid looting of their goods, while others scampered for safety for fear of being attacked.

The crisis led to chaotic traffic situation in the area, stretching from Iwo Road to Gbagi and Airport Road, as well as Agodi Gate and  Governor’s Office at the State Secretariat.

Some youths aggrieved by the alleged unruly behaviour of the park managers later marched to the Government House, Agodi Gate, and the Governor’s office with the body of one of the victims allegedly killed in the crisis.

All efforts by made by some aides of Gov. Seyi Makinde to pacify the youths proved abortive as they, in their hundreds, insisted that they would not leave the entrance gate.

The youths vowed that they would not leave unless they meet with the governor to brief him on what transpired at the Iwo Road area of Ibadan, which led to death of one of them.

As the governor could not attend to them, they were shouting the name of Alhaji Mukaila Lamidi, Chairman of the Park Management System Disciplinary Committee, accusing him of responsible for the killing.

They later left the gate when it was discovered that the governor had left the office through another gate.

The governor’s aides later provided an ambulance that conveyed the lifeless body to the Ring Road State Hospital’s morgue.

None of the governor’s aides was ready to comment on the incident.

However, the deployment of security personnel to the Iwo Road was said to have restored relative peace to the area.

In another development, NAN recalls that no fewer than two persons allegedly lost their lives on Monday night, at Oremeji-Agugu area of Ibadan when members of the proscribed NURTW clashed.

When contacted, Olusegun Oluwole, the Public Relations Officer of Nigeria Security and Civil Defence Corps (NSCDC), confirmed that there was crisis at Iwo Road area of the state capital.

Oluwole said that the cause of the crisis could not be ascertained as at the time of filing this reports.