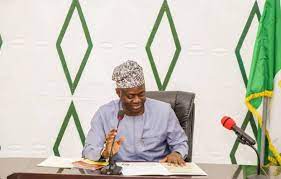 Oyo State Governor, ‘Seyi Makinde, on Monday gave a firm promise to reinstate dismissed public servants if their cases did not involve theft.

He said his administration has prioritised workers’ welfare in the last 44 months, adding that he has ensured no worker was sacked so far in his tenure.

The Governor, who stated this during the 2023 Inter-faith Service, held at the Governor’s Office, Secretariat, Ibadan, said that he has remained faithful to his promise to uphold workers’ welfare.

The Governor also ordered the immediate payment of two months salary deductions to the workers.

Makinde, who said that he has also ensured that no worker has been unjustly dismissed from work, added that his administration is built on fairness, equity and justice.

According to him, his administration has employed a good number of health workers as well as 5,000 teachers, adding that he will continue to prioritise the welfare of the workers in the state.

The Governor, while speaking on the salary structure of Oyo State House of Assembly workers, said that his administration will find means of paying the Consolidated Legislative Salary Structure (CONLESS), within the resources available to the state.

He said: “There is no need for a long speech today, but I will address few of the things you brought up. This is because I promised the people of Oyo State that I have control over whether I will be truthful to them or not. I will always tell you the truth no matter what is involved. I may make mistake, it is only God who is above mistake.

“We promised to look after the welfare of our people; the civil servants and also the people of Oyo State. I will mention one or two things we have done, which are deliberate. For 44 months, we did not sack any individual, rather, we brought back those who were wrongfully dismissed without collecting anything. We worked based on fairness, equity and justice.

“We employed 5,000 teachers and 500 health officers. Though there are still few people that are yet to be brought back into the system, it was not this administration that dismissed those individuals but we have to look at the documents on ground. If they had accused someone of theft, would I bring the person back into the system? No. So, those we brought back were those we were satisfied with their documentation.

“Another major issue that the Labour Unions brought up is that of deductions. I can assure you that it will also be addressed within days. I met with the Commissioner of Finance before I came for this programme and requested for some certain information on the deductions. I told him that the money should have been paid to the workers while they pay to the Cooperatives by themselves.

“So, we are finding a solution that will be sustainable but, to start with, two deductions will be paid immediately out of the five that are outstanding.

“I can tell you that when we came in, we met so many financial infractions and we decided to focus on accelerated development of the state as opposed to chasing people around.”

In their separate preachings, Islamic cleric, Alhaji Bello Rufai and Bishop Ademola Moradeyo, appreciated the governor for fulfilling his electoral promises to workers, adding that the governor has been embarking on policies that would bring succour to the civil servants and people of the state in general.

Earlier, the Oyo State Head of Service, Alhaja Amidat Agboola, pledged the continued support of the civil servants to the government and called for dedication from the workers.

Alhaja Agboola commended the entire Civil/Public Servants of Oyo State for their cooperation with the present administration since inception.

She hinted that despite the challenging experience of dwindling resources, Civil/Public Servants can proudly say that they have a better and stable life in the service of Oyo State.

She said: “Our Senior Citizens have also benefitted immensely from the compassion of His Excellency.

“In the last three and half years of this administration, the government of Oyo State under the leadership of our compassionate governor has made the improvement of the living conditions of the retirees a priority of his administration.

“Similarly, it is imperative to celebrate the peaceful and cordial industrial relations in the state in the year 2022 and since the inception of this administration.”

Agboola also thanked Governor Makinde for the approval given in respect of the 2021 promotion exercises across board, which she said would be based on merit.

The Head of Service mentioned some key milestones of the Governor Makinde’s tenure to include capacity building, approval of the renovation of the Simeon Adebo Staff Development Centre, structured training on ICT usage in the Service, leadership enhancement and development programme organised for Accounting Officers, TESCOM training programme where over 20,000 teachers were trained.

Other milestones include the review of Performance Management System, Review of the Public Service Rules and Regulations as well as payment of 13th month salaries for four consecutive years; prompt payment of pensions to senior citizens on or before the 25th of every month; review of cases of wrongful dismissal and retirement of Officers between 2011 & 2019; upward review of both car and housing loans to the tune of N750, 000.00 and N3, 000,000.00 respectively

She also mentioned the Merit Award Day Celebration aimed at motivating and rewarding Civil/Public Servants, which has been held for three consecutive years as one of Makinde’s achievements.

The Head of Service said that no fewer than 218 officers have been rewarded with a total cash gift of twenty one million, eight hundred thousand Naira (N21.8million) has been disbursed since the award was inaugurated.