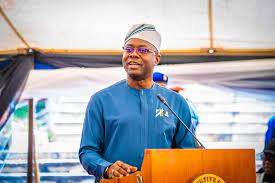 Oyo State Government, on Tuesday, approved the award of the contract for the construction of a Magistrate Court and a Police Station at the Olomi Correctional Centre, Ibadan.

The projects which will be delivered through the Alternative Project Funding Approach (APFA) is expected to be completed in six months.

The State Executive Council which made the approval, also approved the renovation of the Simeon Adebo Staff Development Centre, Secretariat, Ibadan.

The statement said that by constructing the Court, the state government resolved to key into the security architecture as designed by the Federal Government and strengthen the judicial system.

The statement further indicated that the State’s Commissioner for Public Works, Infrastructure and Transport, Prof. Daud Sangodoyin and the Commissioner for Establishment and Training, Hon Siju Lawal, provided details of the contracts while briefing newsmen shortly after the State executive council meeting held at the Executive Council Chambers of the Governor’s Office, Secretariat, Agodi, Ibadan.

Prof. Sangodoyin said: “The Council considered the construction of Magistrate Court and Police Station at Olomi Correctional Centre in Ibadan. Recall that the Federal Government had proposed to relocate that of Agodi to Olomi. And for our state to key into the security architecture and strengthen the judicial system, we considered the move. This will ease justice delivery in Oyo State.

“So, today, we approved the construction of the magistrate court and police station at the cost of N456,979,164,28k to Messrs Dunton Ltd. It will go for a duration of six months through APFA.

“We have a two month moratorium after which we will pay the contractor for a year, beginning from February 2023 to January 2024.”

Similarly, the Commissioner for Establishment and Training, Hon. Siju Lawal announced that the executive council also approved the renovation of Simeon Adebo Staff Development Centre, which is a formal training school in the old Western state, which he said has been abandoned for many years.

He said, “Today, we unanimously approved the general renovation of Simeon Adebo Staff Development Centre, which is a formal training school in the old Western state. It has been abandoned and neglected for many years but the renovation was approved.

“After the renovation, we believe it will compete favourably well with its counterparts in the whole of the federation.

“The project will cost a sum of N121, 48,978,83k and was awarded to All-time Nigeria Ltd with duration of 12 weeks. Thirty per cent payment has also been approved to fast-track the completion of the project.”

In addition, Commissioner for Information, Culture and Tourism, Dr. Wasiu Olatunbosun, also told newsmen that Council meeting discussed government’s efforts at curbing the menace of kidnapping along Lagos/Ibadan Expressway and other areas.

He said: “At the meeting, we discussed the efforts being made by the state government to curb the menace of kidnapping along Lagos/Ibadan Expressway and other areas.

“We are also putting in place a water-tight security to ensure that people in the state can sleep with their eyes closed.

“The other one is the issue of promotion of workers. We observed that some officers who are supposed to be promoted were denied due to systematic error. “We discovered that 1,629 were affected by this error. As a result, they were not considered for promotion, which falls within 2017 and 2020.

“So, the Council graciously approved that the officers involved be allowed to get their promotions unhindered.”