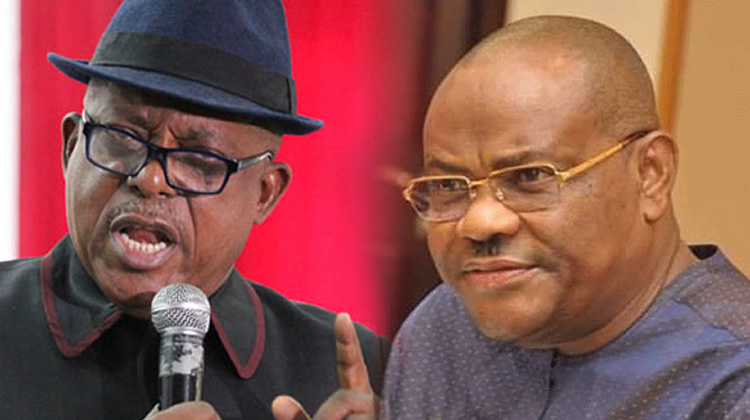 The two Deputy National Chairmen of the party, Yemi Akinwonmi (South) and Senator Suleiman Nazif (North), in separate announcements on Tuesday, claimed to be the party’s acting National Chairman.

It was gathered that while Akinwonmi was loyal to the Rivers State Governor, Mr Nyesom Wike, Nazif had the support of the suspended National Chairman of the party, Uche Secondus.

A Rivers State High Court presided over by Justice O. Gbasam of the Degema Judicial Division vacation court, sitting in Port Harcourt, had on Monday granted an order restraining Secondus from parading himself as the national chairman of the party.

This was sequel to the consideration of an ex parte application in suit No: PHC/2183/CS/2021 filed by Ibeabuchi Alex, Dennis Amadi, Emmanuel Stephen and Umezirike Onucha against Uche Secondus (1st defendant) and the PDP (2nd defendant).

On Tuesday, Akinwonmi issued a statement declaring himself as the acting national chairman in the absence of Secondus, citing Section 45 (2) of the PDP Constitution.

His statement read in part, “Our attention was drawn yesterday evening (Monday) to a court order, which purports to restrain our National Chairman, Prince Uche Secondus, from summoning and presiding over the meetings of the organs of the party.

“Section 45(2) (b) of the Constitution of the Peoples Democratic Party empowers me to summon and preside over party meetings in the absence of the national chairman.

“In the foregoing circumstances, as the Deputy National Chairman (South) of the Peoples Democratic Party, after consultation and in exercise of the aforesaid powers, I hereby deem it fit and proper to postpone the National Working Committee meeting earlier scheduled for today (Tuesday) until further notice to allow for broader consultation in the overall interest of our party.”

A few hours after the statement, members of the party’s NWC under the leadership of Nazif stormed the PDP national secretariat in company with armed policemen and went straight into the NWC conference room for a meeting that started around 2pm.

Soon after the meeting, which lasted about 40 minutes, Nazif addressed the media.

He said, “Members of the NWC will recall that this morning, we were in possession of a valid court order from a high court in Degema, Rivers State, issuing an order removing Secondus as a member of the Peoples Democratic Party as well as the national chairman of our great party.

“A court has also ordered that from August 23, 2021, Prince Uche Secondus should stop parading himself as the national chairman. The NWC hereby complies fully with the court order.

“Consequently, the NWC hereby calls for an emergency NEC meeting on Friday, August 27, 2021, at 10am prompt to deliberate on matters affecting the party. You are all aware that the PDP is a law-abiding party, the party that follows due process. So, we have received this order and this is it.

“On this note, distinguished NWC members, I hereby take full charge of the Peoples Democratic Party as chairman in an acting capacity.”

While explaining his reason for taking over, Nazif said, “We have waited this morning for the deputy national chairman (South), who has been incapacitated and who has not been attending the NWC meetings in the last nine months. As you know, in the absence of the deputy chairman (South), I take full charge; so, I am hereby calling for an emergency NEC meeting for August 27, 2021, by 10am prompt to deliberate on the new development.

“And I believe all the leaders of this party, the owners of this party, will be in attendance and that our governors and former presiding officers will be part of the NEC meeting to deliberate on all pending issues.”

In response to a question as to whether there was now a division among members of the NWC, he said, “Let me make this very clear that this meeting was called for 2pm and like I said, the deputy national chairman, South, has been incapacitated and did not attend any meeting in the last nine to 10 months as far as the NWC is concerned.

“He has not been in communication with any member of the NWC for the last 10 months. This party must continue its process.

“This is the resolution that was passed by the expanded caucus. And this was the resolution passed by the NWC at our last meeting and we all agreed that there would be a meeting today, a meeting that was supposed to be presided over by the national chairman; unfortunately, the court order came from a competent court and stopped the chairman from acting as the chairman of the party.”

Earlier, a group of protesters stormed the National Secretariat of the party to protest in favour of Secondus.

The protesters accused Wike of being the brains behind Secondus’ problems and displayed placards with inscriptions such as: ‘Secondus Must Stay’, ‘PDP is a Law-Abiding Party’, and ‘Wike, leave Secondus alone’.

At a press conference in Lagos, Akinwonmi said the crisis rocking the opposition party would not affect its fortunes in the coming elections.

He added that the zonal congress of the party would hold as scheduled.

He stated, “The crisis rocking our party will not in any way affect its chances in future elections. When they say someone is a chairman, there are some people working for the party. So, the chairman of the party is just there to direct the affairs of the party; the people doing the work are there.

“The crisis won’t affect the planned zonal congresses; they will hold as scheduled.”

He also refused to blame Secondus for the crisis in the party.

“I’m from a culture where you don’t blame your boss; Secondus is my boss, I don’t know what led to the crisis; so, it will be difficult to comment or blame anybody for the crisis,” he added.

Akinwonmi, who arrived at the party’s national secretariat in Abuja around 5.20pm, addressed secretariat staff members, saying, “I’m a man of peace and not a man of crisis.

“It is the call of duty that caused me to be here. I come to address you as the acting national chairman. All other meetings conducted in which I was not here are null and void. At the appropriate time, I will arrange for a proper meeting of the party.”

Speaking to the media soon afterwards, Akinwonmi admitted that he was ill at some point, but that he was better now.

“Sickness is not the friend of anybody. I was coming to Wadata House here and I had a stroke; I was in Cedar Crest Hospital for three months. I’m getting better now; my recovery rate is up to 70 per cent now. I trekked from the car park to this place,” he said.

Also speaking on the occasion, the National Secretary of the party, Senator Ibrahim Tsauri, explained that there were no factions in the PDP.

He stated, “Today, we are here to adopt the doctrine of necessity as the PDP is a law-abiding party. The meeting that was held this afternoon was because I sent the notices for the meeting yesterday (Monday). We were not aware of the judgment of the court in Port Harcourt.

“The meeting was fixed for 2pm; unfortunately, the Deputy National Chairman (South) had not arrived at the time and in line with our constitution, at such times, his counterpart from the North presided over the meeting.

“There is no division. We have given our lawyers the judgment; they will look at it and advise us. After this meeting, I will sit with Akinwonmi and prepare for NEC; after the NEC, we will prepare for the convention, which will be held very soon.” – Punch.

Kanye West now wants to be known as Ye.