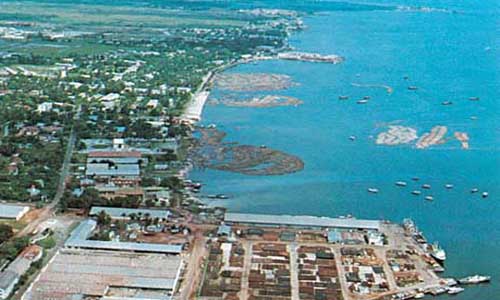 A Gabon flagged fishing vessel LIANPENGYU 819 has been  hijacked 83 nautical mile off Port Gentil, Gabon. The LIANPENGYU 819 is understood to have a crew of 14 all Chinese nationals.

Port-Gentil or Mandji is the second-largest city of Gabon, and its leading seaport. It is the center of Gabon’s petroleum and timber industries. The city is located on a delta island in the Ogooue delta with no bridges to the mainland. Nearby Cape Lopez is Gabon’s westernmost point. It had a 2013 census population of 136,462.

Reports indicate that the boat came alongside and the attackers attempted to board the vessel using ladders. The master is understood to have taken evasive action and the original boarding failed.

Vessels are reminded that the risk profile for all vessels operating within the Gulf of Guinea is CRITICAL at this time with further incidents highly likely and expected daily.

This the 11th offshore incident this year and the 5th successful boarding. Notably this is the third attack recorded within 2021 that occurred out with the JWRC HRA.

Total incidents throughout West Africa in 2020 showed a partial increase of 12% on those of 2019. Incidents involving failed approaches showed a significant increase within 2020 with 25 such incidents recorded against 10 in 2019.

Dryad advises all vessels to avoid the vicinity of the reported incident, reporting all suspicious activity to the relevant maritime authorities.

Ministry, CBN collaborate to ensure provision of NIN through BVN