Police hold town-hall meeting in Okada, ahead of yuletide 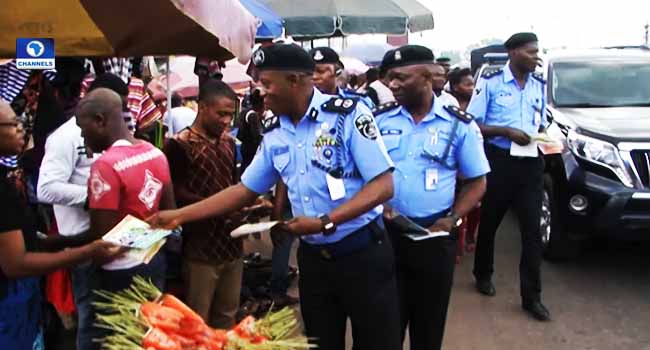 The Police Command in Edo on Monday, held a town-hall meeting at Ofumwegbe, near Okada, in Ovia North East Local Government Area, ahead of the yuletide.

The Commissioner of Police in the state, CP Phillips Ogbadu, in his opening remarks, said that the town-hall meeting was to appraise and assess activities of security operatives and local vigilantes and identify hot spots.

Ogbadu further disclosed that the meeting was to play up security across the state because crime rates are usually high during the ember months.

“Kidnapping is a major concern to us, though cases of kidnapping have reduced, but we need to ensure that it is completely eradicated”.

He noted that the Edo Government has set up a security architecture, which is organic in nature, because it is community based.

“Since the security architecture is community based, it means there is need to talk to critical stakeholders in the communities for them to understand the workings of the security agencies and how it affects them.

“The Police have a role to play, so is the government as well as members of stakeholders of the communities.

“This is the message we have brought to them and with this meeting, the people have defined the areas not clear to them, and a deeper understanding is already achieved,” he said.

Gov. Godwin Obaseki of Edo, in his remarks, said that the meeting would help strengthen the anti-grazing bill presently before the state house of Assembly.

Obaseki, represented by his deputy, Philip Shaibu, noted that every residents of the state had a stake in ensuring security within the state.

He added that collaboration and cooperation are needed in sustaining and reducing crimes in the state.

He therefore called on communities to play their roles well in ensuring community security.

The governor stressed the need to re-enact those value systems that help community security.

“When we stop patronising and giving awards to people we do not know their source of wealth, our old value system will return,” he said.

He identified Ofumwegbe, Benin-Lagos road as a flashpoint for kidnapping and various crimes.

Meanwhile, Malam Mohammadu Buhari, leader of the Fulanis in Ovia North East, expressed their readiness to work with the community and government to fish out the bad ones, among them. (NAN)